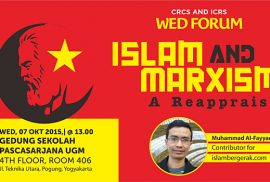 Abstract
The return of capital invites the return of marxism. As a set of epistemological and theoretical tools for understanding capitalism and changing it, Marxism suffers from lack of adequate presentation amid the Indonesian academia and is often discredited as obstinately “ideological”, “dogmatic” or simply “utopian”. On the other hand, suspicion over Marxism and its emancipatory practice is widespread among religious discourses.  Indeed, Marxism is often understood as the antithesis of religion.  Should Islam renounce Marxism and embrace the “truth” of Capital while letting itself be corrupted by Capital? Could Marxism be a viable way of restoring the liberating messages of Islam?