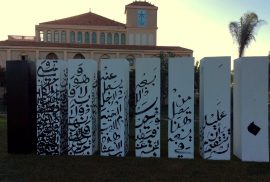 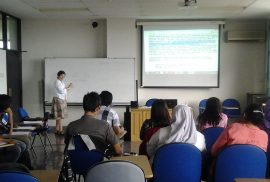 [perfectpullquote align=”full” cite=”” link=”” color=”” class=”” size=”13″] “Women’s bodies can be very good when interpreted as fertility, mercy, and wisdom, but they can also be interpreted as objects attracting sexual desire or even worse as spiritually less than men. . . The narration of Hawa (Eve) and Sri (Javanese goddess figure) could be seen from any point of view, depending on our intention.  Yet, perceiving that male is more spiritual than woman by nature is not only male centrist, but also discriminating over the other and shows how arrogant it is.”

-CRCS’ Student- [/perfectpullquote]
Teaching the course on “Religion, Women, and the Literatures of Religion” was one of the highlights of my teaching career.  From the first day, when I stepped into the classroom and was greeted with smiles and welcomes, I knew I could feel comfortable bringing what I knew and wanted to teach to these students.  This class of students had already been seasoned and prepared to be a community of learners by having studied the better part of the year in this unique program.  I did not detect the kind of competitive edge that is so much a feature of classroom interaction in the United States, and I feel that has something to do with the culture here of long-standing collaboration and sharing.  It was certainly evident in the way these students worked together, laughed together, and enjoyed time after class, such as in “buka puasa,” the opening of the fast that comes during Ramadhan.  Coming from various parts of this vast country, from Medan on the island of Sumatra, from Aceh, from the small island of Lombok, as well as many cities around Java, they also represented diverse religious backgrounds, the majority Muslim, but also Protestant Christian and Catholic Christian (the one Catholic being a Sister of Notre Dame whom the students had come to see as “ibu,” Mother).  About three-fourths of the students were male, and although that might have seemed an impediment to learning almost the entire semester only about women, these young men showed no signs of resistance, and in fact demonstrated an amazing openness and willingness to engage the issues confronting women in the Midldle Ages as well as today.
What was just as impressive to me was that they were reading and writing academic studies in English, a discourse that can be difficult even for native speakers!  They stretched themselves in so many ways that it was truly admirable, and I know many of them struggled.  Despite that, they produced response papers that were for the most part readable and intelligent, some brilliant.  I heard so many new insights from their unique perspectives, and they helped me to look at these works by medieval and modern women with new eyes.
The content of the course consisted primarily of writings from Christian mystics and visionaries of the Middle Ages, as well as a thesis written on Sufi women mystics.  We encountered the remarkable prison diary of St. Perpetua, martyred in 203 C.E., and marveled over the multi-talented abbess, musician, poet, prophet, mystic, Hildegard of Bingen, discussed food in the writings of the unique medieval women’s group, the Beguines, and then focused on the book, Showings, written by Julian of Norwich.  I would like to include here some of the comments students made when reading her beautiful treatise, to give some idea of how open they were to learning across boundaries of time, gender, and theology:
“Her style of contemplating God is set in the fourteenth century, but the meaning is still alive and meaningful today and invites us to share in that same trustworthy love. “
“Showings reveals a woman who experienced God directly and as “our mother.”
“Her revelations of the feminine side of God are a very significant contribution to all of us now.”
“God’s grace and divine love through a feminine figure is such an empowerment and encouragement for all beings, not only women.  Also men, because the feminine qualities show how simply love can comfort and heal, just like a mother’s love.”
“The dualism of feminine/ masculine no longer exists in Julian’s understanding of God.  God is feminine, and at the same time also masculine.  The human/body and the divine, the feminine and masculine, each of both is actually a union.”

I was very happy to have CRCS’ alumna, Najiyah Martiam’s Master’s Thesis on Sufi women, based on her interviews with three women connected to   pesantrens, in order to balance what could have been an over-emphasis on the Christian tradition, the one I know best.  We also had a chance to invite another CRCS alumna, Yulianti, a Buddhist scholar who happens to be a friend of mine.  Yuli helped explain how the female lineage in Theravada Buddhism died out, and has not been restored because the line was broken.
Two of the most exciting, energizing classes were led Dewi Chandraningrum, the editor of Jurnal Perempuan  (Indonesian Feminist Journal),  who brought us readings from her edited volume, Body Memories.  I was very happy to have Bu Dewi’s presence in the classroom, and to see the student’s immediate warm responses to her as she sometimes spoke in Bahasa Indonesia, the language most accessible for them.  In her first class, she divided the students into three groups, in discussion of three topics relating to the female body:  menstruation, sexual intercourse, and childbirth.  What could have been a class of silence, embarrassment, or even giggles, became a serious, mature conversation among the students.  I was awed by their willingness to discuss such sensitive topics together, with mixed genders.  Bu Dewi’s second class introduced us to the women activists of Kartini Kendeng, and the opposition to the proposed cement factory that has already decimated villages and their way of life in northern Java.
I would like to say in conclusion, that based on the readings from the women mystics like Julian of Norwich, whose theology of the body is holistic, non-dualist, and healthy, and intensified in the sessions led by Bu Dewi, this class became almost a spirituality of the body.  Sacred sexuality and the sacredness of the female body became an underlying theme.  I will let one of the students have the last word by quoting from his final paper:  “Women’s bodies can be very good when interpreted as fertility, mercy, and wisdom, but they can also be interpreted as objects attracting sexual desire or even worse as spiritually less than men.  . . .  The narration of Hawa (Eve) and Sri (Javanese goddess figure) could be seen from any point of view, depending on our intention.  Yet, perceiving that male is more spiritual than woman by nature is not only male centrist, but also discriminating over the other and shows how arrogant it is.”  This student and others showed me at what depth of understanding they were interpreting what they read and heard.  They were a gift and joy to teach!
____________________________
Maria Lichtmann is a Fulbright fellow to Indonesia. She taught “Women, Religion, and Literatures” in intersession semester at CRCS from June to July, 2016. She is a former professor of Religious Studies at ASU and currently teaching at Widya Sasana, Malang.