A great Buddhist university in a Jambi Muslim village 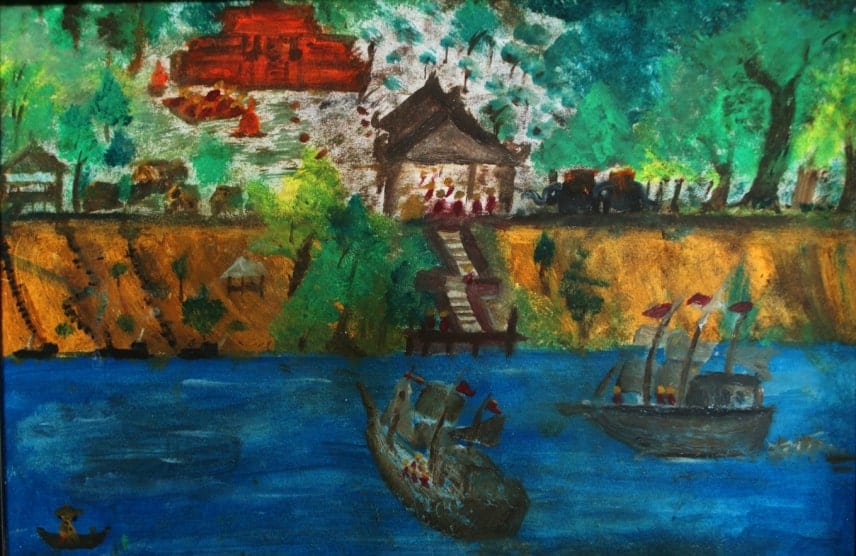 A great Buddhist university in a Jambi Muslim village

The island of Suvarnadvipa (Sanskrit  for the Golden Island, now called Sumatra) was home to a great university, a vast center of knowledge at the crossroads of the Buddhist Sea Route, which attracted such great sages as the Chinese pilgrim Yijing (I-Tsing) from the seventh century and the Tibetan Buddhist Atisha from the eleventh century. Its location is now home to a Muslim village, which is seeking to understand and remember this history.  Elizabeth Inandiak, a French writer and translator who has lived in Yogyakarta for many years, told the story at the CRCS-ICRS Wednesday Forum on October 3, 2018.

The precise site discussed is Muara Jambi, now in the regency of Muaro Jambi, located about thirty kilometers from the mouth of the Batanghari, the longest river in Sumatra. Past civilizations were usually built around big rivers, Inandiak stated: while there is the Nile in Egypt, and the Indus and Ganges in India, it was the Batanghari in Sumatra. The temple site in Muara Jambi has an area of ​​12 square kilometers, with a length of more than 7 kilometers and an area of ​​about 260 hectares and stretches in the direction of the river path, with 84 temple complexes each of which has a main temple surrounded by several places for teaching activities. “They may be called temples, but as villagers of Muara Jambi often say, they were faculties of once one of the largest Mahayana Buddhist universities in the world,” said Inandiak.

The university of Muara Jambi witnessed the era of Srivijaya kingdom. The capital of the kingdom was Palembang, but the intellectual center was in Muara Jambi. (In Inandiak’s analogy: it is like Washington and Boston-Harvard in the U.S., and London and Oxford-Cambridge in England.) Archeologists still do not dare to call it ‘university’ due to still few epigraphs and written documents attesting its roles, but the hitherto found evidences suggest that those complexes were not just temples but also study centers. In fact, the entire design of the site is similar to that of India’s Nalanda, the largest Mahayana Buddhist monastic university of its time. Among the earliest accounts on Muara Jambi talked about by Inandiak were that of I-Tsing and Atisha.

The decreasing significance of the famous continental Silk Road due to the decreasing demand of silk from China and the many wars waged in Central and South Asia made I-Tsing, who wanted to go to Nalanda, had to travel by sea through the Straits of Malacca. His travel account has been translated into English in 1896 by Junjiro Takasuku titled A Record of the Buddhist Religion as Practiced in India and Malay Archipelago, A.D. 671-695. In this account, I-Tsing told that he stopped in an island with a “fortified city” he called Fo-Che where more than a thousand Buddhist monks study all the subjects studied in Nalanda. What is Fo-Che? Many centuries later, the French epigraphist George Coedes came up arguing that Fo-Che or San-fo-ts’i was the kingdom of Srivijaya. Being “fortified” is a common design for Buddhist monasteries at the time and similar to Nalanda. I-Tsing did not mention a precise identification and mentioning of Muara Jambi, but his hints suggest a strong probability that it was Muara Jambi. Atisha’s journey in India, Sumatra and Tibet has been painted down on the wall of the apartment of Dalai Lama in Tibet.

A few centuries later, Atisha, a royal-born from a kingdom in Bengal who chose to be a wanderer seeking knowledge from Buddhist masters including in Nalanda and in Srivijaya, told in his account in Tibetan that his most important master was Serlingpa or Dharmakirti. Following his descriptions in that account, it is most likely that he met Serlingpa at Muara Jambi. In his account, Atisha, named Dipamkara Jnana after monk ordination, spoke high about Serlingpa; when Serlingpa was teaching and surrounded by five hundred and seventy-two monks, Atisha felt as if he was seeing Buddha surrounded by his disciples. After spending 12 years studying at Muara Jambi, Atisha went back at the same year when the Chola kingdom from South India invaded Srivijaya. In Tibet he served for thirteen years until his death leaving writing containing teachings from his past masters, more notably Serlingpa from Muara Jambi.

One then has to ask: what made the university of Muara Jambi leave only its (ruined) temples? Some argue it was due to the attack from the Chola kingdom. But this occurred in the eleventh century while a beautiful statue of Prajnaparamita from Muara Jambi found is dated from the 14th century. Another argument says it was because of leprosy. A stronger probability is that it was because of a tsunami. The design of Muara Jambi temples surrounded by many canals indicate how its inhabitants were aware that floods often come from the Batanghari river and the area itself is prone to disaster. The local people call it in the local language of Muara Jambi “menapo”. “Napo” means “deer” whereas “me” means “location”. Muara Jambi, located in a high location, was for animals to take refuge during floods.

Today, the site is conserved by the villagers of Muara Jambi, some of whom are building a community center for the site conservation and reenactment of the past (becoming a center of study again) called Padmasana Foundation. Inandiak has also published a book on Muara Jambi titled Dreams from the Golden Island (2018) co-published by Padmasana Foundation. From her talk, Inandiak invited us to reconnect ourselves to the past. Remnants or influences from the past still prevail and preserved by the locals who are Muslim-majority. They are of different religion but are proud of a great heritage residing in their village. Some Muslims give Buddhist names to their kids, such as Prajnaparamita. Salawat recitation by Muslims uses a gong—and a gong is also found in one of the twin temples (candi kembar) on the Muara Jambi site. These indicate the still existing connection to the past despite different worlds. Lastly, Inandiak urged archaeologists to work with Muara Jambi villagers, because they indeed know a lot about the site. “Sixty percent of information in my book is from the villagers,” Inandiak said. She is concerned very much with the archaeologists who look down to the villagers as if their knowledge is not legitimate and so she calls for a “public archaeology” in Muara Jambi: archaeologists must work together with the local community who have conserved the site and share their findings to them.

Chusnul Chotimah is CRCS student of the 2018 batch. Watch the livestreaming of Inandiak’s Wednesday Forum talk on the Facebook page of CRCS UGM. Pictures used in this post are from Inandiak’s presentation slides.