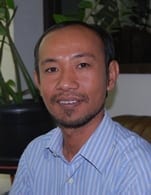 Having been involving in NGO activities in Yogyakarta since his undergraduate, Budi Asyhari decided to continue his master study at CRCS in 2004. In the second year of his study, he has involved in some of researches done by CRCS as research assistant. Since then, he has been part of CRCS research team. His interest of study is mainly about ritual studies.