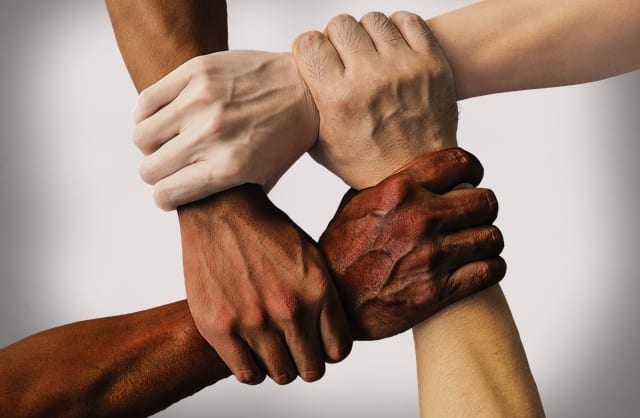 Civic engagement plays a pivotal role to prevent communal religious violence. Ashutosh Varshney in his book Ethnic Conflict and Civic Life (2002) argues that, rather than intra-communal relation, inter-communal engagement opens more possibilities to create network of civic life that brings different communities together and is relatively independent of state. Varsheny catogerizes this civic life into two: associational and quotidian. The first is the formal form of civic engagement, whereas the latter is the everyday life of community interaction. Both forms of engagement promise peace within communities, and conversely, their absence increase the likelihood of communal violence. The associational form tends to be more powerful in facing polarizing politics.

Varshney makes an example on how inter-communal engagement influenced the overcoming ways of Hindu-Muslim riots in India between 1950 and 1995. He analyzes data of the conflicts in various urban and rural areas resulting in two contradictive outcomes. First, the share of villages in communal rioting turns out to be remarkably small. Second, within urban India, Hindu-Muslim riots are highly locally concentrated. Between those years, rural India, where two-thirds of Indians still live, accounted for less than four percent of the deaths in communal violence. On the other hand, the eight cities—Ahmedabad, Bombay, Aligarh, Hyderabad, Meerut, Baroda, Calcutta, and Delhi—experienced severe impact from the riots with a little more than 49 percent of all urban deaths (and 45.5 percent of all deaths).

Such communal violence is highly related to local mechanisms. Varshney explains that there are two mechanisms identifying the link between civic network and ethnic conflict. First, civic network often makes neighbourhood-level peace possible as if communications between members of different religious communities are effectively facilitated. Day-to-day interactions allow people to gather and form temporary organizations in times of conflict. Such organizations are highly significant to dispel the causes that enable communal violence. The members of communities can police neighborhoods, kill rumors, provide information to the local administrations, and facilitate communications between communities through these kinds of organization. Such neighborhood organizations are relatively difficult to form in cities where people from different religious backgrounds live in extremely segregated neighborhoods.

The second mechanism suggests why the associational form of engagement is sturdier than the everyday form in dealing with ethnic conflict. When vibrant organizations work effectively to serve the economic, cultural, and social demands of the communities, the support for communal peace not only tends to be solid, but can also be more strongly expressed. Quotidian forms of engagement may make associational forms possible, but associational forms can fulfil interests that cannot be met by everyday interactions. Inter-communal business organizations, for instance, survive by tying together the business interests of two communities, not because neighbourhood exists between them. In peaceful cities, an institutionalized peace system exists. When such organizations as trade unions, associations of businessmen, traders, teachers, doctors, lawyers, and so forth are communally integrated, counterpoising forces are created.

Tadjoeddin provides an example how the integrated elites can moderate ethic violence. Several ethnic associations in East Kalimantan initiated the establishment of Forum Komunikasi Persaudaraan Masyarakat Kalimantan Timur (FKPMKT – The Communication Forum for East Kalimantan Community Brotherhood) in early 1998 in response to the increased national political tensions before the fall of Suharto. The associations met regularly and the meetings were chaired by representatives of four largest ethnic groups in the province: Bugis, Banjar, Jawa, and Dayak. Every ethnic group had equal opportunity to lead the forum every three month. Many observers consider the presence of such forum as one of the pivotal factors in preventing communal violence in the region. Because of this forum, ethnic violence did not erupt in East Kalimantan, while the neighboring province Central Kalimantan suffered severe communal violence between Dayak and Madurese in early 2001.

On the other hand, fragmentations between the elites of Nahdlatul Ulama (NU) and Muhammadiyah during the last days of Abdurrahman Wahid (Gus Dur) presidency in June 2001 caused communal conflict at the grass-roots level between followers of these two largest Indonesian Muslim organizations. A large number of NU-affiliated groups in East Java responded in high tension the endless efforts to depose Gus Dur from presidency. They cut down trees along main roads and attacked properties that belong to Muhammadiyah in some parts of the province.

To synthetize the views of Varshney and Tadjoeddin, rather than state, civic engagement is highly influential in preventing communal violence. While Varshney stresses the form of inter-communal relation, Tadjoeddin provides intra-communal approach as alternative. For Varshney, to reach a peaceful community, inter-communal engagement cannot be overlooked as it enables different communities to create spaces for them to gather.

Fikri Yudin is CRCS student of the 2018 batch. This essay  is a reflection on two of the many readings discussed in the CRCS course “Religion, Violence and Peacebuilding,” taught this semester by Dr. Mohammad Iqbal Ahnaf.