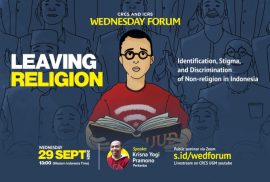 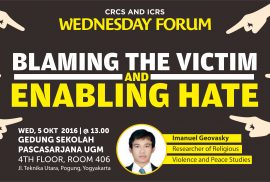 Abstract
Who has the authority to end the discrimination and violence religious minority groups continue to face despite protections promised in Indonesia’s constitution? This talk examines three recent cases—the Ahmadiyya in West Java, Shi’a in East Java, and two HKBP churches also in West Java—to show how the three kinds of authority (legal-rational, traditional, and charismatic) identified by Max Weber are all used to legitimate extremism and violence in the face of contradictory actions by the government, including religious leaders with institutional authority inside it. Unless the actors in the government recognize that they must use their authority responsibly, extremist religious leaders who seek to mobilize hate against others, especially minorities, will continue to be able to do so and Indonesian society will remain immature.
Speaker
Imanuel Geovasky is graduated from School of Public Policy and Social Research International Christian University, Tokyo, Japan. He got Japan ICU Foundation Scholarship (JICUF) (New York based) and United Board for Higher Education in Asia (UBCHEA) (New York and Hongkong based) Faculty Development Scholarship for Master Degree in Peace Studies at International Christian University, Tokyo, Japan, from September 2013 – July 2015. His focus research on Religious-based violence and discrimation against minorities in Indonesia society, Human security and Peace building.