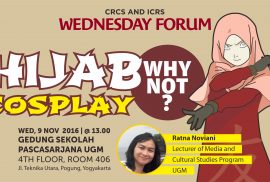 Abstract
The Islamic Otaku Community (IOC) is an Islamic fan-based community, which encourages young Muslims—male and female—who are actively engaged in otaku fandom to stay committed to Islamic norms and values. Hijab Cosplay can be perceived as a unique site which brings together two worlds, the sacred/ascetic activities of being a Muslimah and the secular/hedonistic activities of the otaku, in which young Muslimah not only choose, appropriate and reproduce characters from Japanese anime, manga and games, but also (re)claim their femininity as Muslimah in relation to it. In this talk, I aim to discuss how Muslim femininity is remediated through the practice of hijab cosplay, which is posted and circulated on the IOC fansite, and how the female dressed body as a mediation of femininity is actively mediated in another medium. Since the goal of remediation is to refashion or reform the earlier version of the medium, I consider the ways in which young Muslimah attempt to refashion and reclaim Muslim femininity through fandom practices. Since cosplay is not confined to the act of costuming, but is also immersed in wider fan practices, I also look at the remediation of Muslim femininity in Islamic Mangaka (fan arts and fans writing produced and posted by IOC members).