A Field Trip to Hindus’ Pura Jagatnatha in Yogyakarta 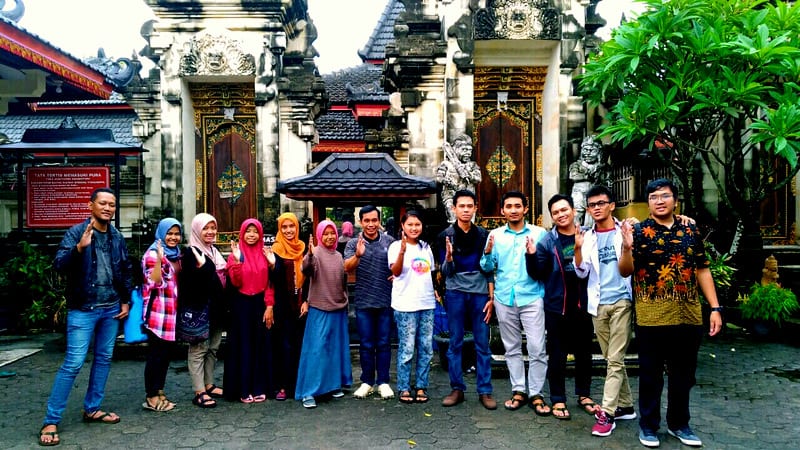 A Field Trip to Hindus’ Pura Jagatnatha in Yogyakarta

“Talking about the environment in Indonesian Hinduism cannot be separated from Tri Hita Karana, a concept concerning the threefold relationships: Parahyangan or between human beings and God; pawongan or between human and other humans; palemahan or between human beings and nature. We believe that every living thing, animal and plant included, has a soul,” said Nur Khatimah, a Hindu women’s activist, on Saturday, November 10, 2018, when CRCS’s World Religions class visited Pura Jagatnatha, a Hindu temple located on Jl. Pura 370, Plumbon, Banguntapan, Bantul, DI Yogyakarta. Tri means three, whereas Hita means prosperity and happiness and Karana means source. Tri Hita Karana thus means three sources of happiness.

Pura Jagatnatha is the biggest Hindu temple (pura) in Yogyakarta.  It has more than 300 regular worshippers, and is a favourite praying place for newcomers to the city from Bali. Hindus can come very frequently to the pura, up to three times in a day: at sunrise, in the afternoon, and after sunset. Besides these daily rituals, they also hold monthly prayers, namely Purnama and Tilam ritual conducted congregationally. The pura is most crowded during the annual rituals such as Nyepi, Galungan, Kuningan, Saraswati, Pagerwesi, and Siwaratri, all of which are led by panindita such as Mr. Achir Murti Adi Wiyono, Jalmono, Widodo Langgeng, and Budi Utomo.

During discussion, CRCS students were given explanation that Hindus’ God is not the same as Abrahamic religions’ personal God. Hindus understand their God as the universe itself, called Brahman, the macrocosm or bhuwana agung; and while everything in it (the microcosm or bhuwana alit) has a soul called atman as a manifestation of Brahman. As such, in their dealings with living beings, humans have to bear in mind that they deal with manifestation of God, as they themselves are. A renown Hindu concept reads “Tat Twam Asi”, which means “You are me and I am you”, as they bear the same essence from God’s manifestation.

Nur Khatimah further explained that Hindus’ respect toward nature is manifested in their ritual through sacred offerings to the environtment, called Bhuta Yadnya. Hindus also have one Day of Silence (Nyepi) each year with a purpose to free the earth from pollution. In Yogyakarta specifically, Hindus hold the annual ritual of Melasti and Wanakerti. “Melasti is for respecting water by giving offerings to the sea (sedekah laut), while Wanakerti is for forest. Both are held shortly before the Nyepi day as a form of Hindus’ devotion to God by giving respect to nature,” she said.

In Bali, the center of Indonesian Hinduism, each community has an association called Subak to manage the traditional rice field irrigation system. The existence of Subak for Balinese people is not only about agriculture. They understand its mission as a duty, derived from one of the abovementioned concept of Tri Hita Karana. Subak therefore also holds rituals to invoke fortune and fertility for environment, by giving offerings to the Goddess of fertility, Dewi Sri. Every Subak in Bali has a temple to worship Dewi Sri, as in each temple has its own worshipped deity, such as deity of Baruna in puras near the sea (called Pura Segara), Pura Meru near mountains, Pura Melanting near markets, and so on.

The tradition of giving offerings to Dewi Sri is still maintained in Klaten, Central Java, and is called wiwitan, with prayers delivered for the Dewi to give abundant harvest. This tradition is started by mblowoki, which is offering foods in every corner of rice field while doing the prayer. A similar ritual is still held in some parts around Central Java—and some of the practitioners no longer claim to be Hindu—especially before planting rice season.

These practices of giving offerings, however, do not go without criticism. Besides that coming from some religious communities criticizing these practices as idolatrous, some people point out that those offered foods are often left, neglected and contributing garbage instead. Such also happens in Melasti rituals in which praying facilities are then abandoned and garbage, including plastics, scattered around the beach.

Responding to those critiques, Nur Khatimah said she feels sorry to hear that because the essence of Melasti ritual is cleansing the soul and preserving nature. “Hindus are human beings; they sometimes forget their religious teachings. So here we must reflect on that the concept of Melasti must be understood more comprehensively for the ritual practitioners to be more caring of their stuffs after the ritual,” she said.

From this field trip, CRCS students have been exposed to how people of different religions translate their environmental theology into regular ritual practices, a theology that is particularly strong in (Indonesian) Hinduism. However, like in many cases of other religions, the teachings may not always manifest in practices as ideally conceptualized as in theory. The thing to work on then is how to get the fellow religious practitioners to understand more about the essence of their ritual and, more importantly, how to make this understanding manifest in the people’s daily culture. []