Contestation over the sacred space of al-Aqsa 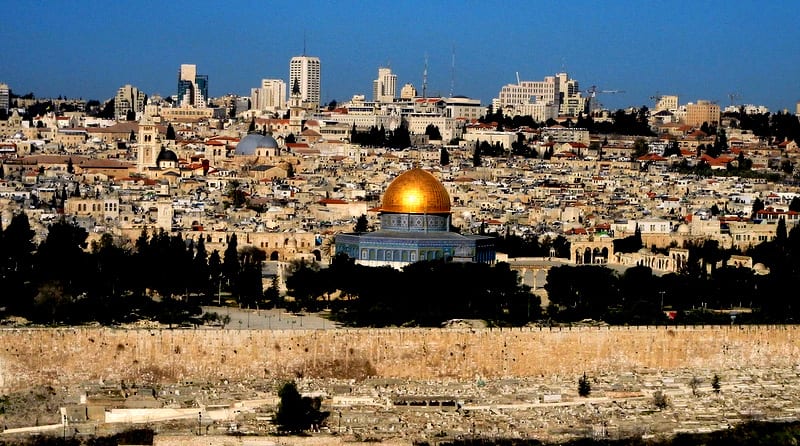 Contestation over the sacred space of al-Aqsa

Based on his visit to Al-Aqsa in Jerusalem, Dr Achmad Munjid, a senior lecturer at the Faculty of Cultural Sciences UGM, shared his experiences and reflections of the place sacred to three major religions at the CRCS-ICRS Wednesday Forum on September 12, 2018. He argued that both al-Aqsa Mosque and the Dome of the Rock are the earliest major remaining Islamic construction. They are located on Mount Moriah in the Old Holy City of Jerusalem, in a compound Jews and Christians refer to as the Temple Mount while Muslims refer to it as al-Haram al-Sharif or the Noble Sanctuary.

Al-Aqsa and the Dome of the Rock were established by Abd al-Malik ibn Marwan ibn Yazid ibn Mu’awiyah ibn Abi Sufyan in 691-692 CE and completed by his son al-Walid I in 705 CE. They have been renovated three times, under Sulaiman the Magnificent in the 16th century CE and twice by the Jordanian Kingdom, in 1961 and 1993. Since they were erected, Dr Munjid stated, this space has undergone consecration and desecration until today.

The Dome of the Rock is believed by Muslims to be the site where Prophet Muhammad ascended (mi’raj) from its so-called “flying stone” to heaven. Al-Aqsa mosque was the first qibla (worship direction) before being replaced by the Ka’bah in Mecca. For most Muslims, al-Aqsa is the third holiest place after Mecca and Medina.

For the Jews, however, the Temple Mount is the Jewish holy of the holies, and therefore common Jews are not allowed to enter that space. Only the high-ranked rabbis can visit it once a year during the day of Yom Kippur. In this space buildings have been erected and then destroyed, from Solomon Temple to Herod Temple to Jupiter Capitolinus to the current al-Aqsa and the Dome of the Rock. Today the only remaining part of the Temple is the Wailing Wall located in the outside of the al-Aqsa compound. Above all these sites, there is a very sacred object, namely Foundation Stone (the Mi’raj Stone for Muslims) that is believed to be the site where Abraham attempted to sacrifice his son Isaac and the first human Adam was created from its dust. This stone is also regarded as their prayer direction for it was a site where God manifested His presence.

Dr Munjid went further by exploring the contested narratives between the two religious traditions. Citing some pre-Crusade sources from leading orientalists, he explained that the decoration of the Dome of the Rock was influenced by many churches in Jerusalem, particularly the Church of Holy Sepulchre built during the Constantine era. There are two theories challenging the commonly accepted Islamic narrative on how and why this site was built. According to these theories, instead for commemorating the spiritual experience of Isra’ Mi’raj, this site was built for two other main reasons.

The first theory, formulated by Christel Kessler and Raef Najm, argues that this sacred site was built to attract the Christian audience to visit this site and keep the Muslim audience from not attending Christian sites as the practice of pilgrimage was a very significant mode of being religious at that time. This argument is based on the mosaic and architectural design of the site. Quranic verses (e.g. Say not: ‘Three!’ Cease! (it is) better for you) written in both inside and outside of that building relate to the polemic over the Christian Trinity. The Quranic verse on Isra’ (i.e. Glorified [and Exalted] be He [Allah] who took His slave [Muhammad] for a journey by night from al-Haram to al-Aqsa mosque) was added later by the Turkish Ottoman king Sulaiman in the 16th century. This view implies that this sacred site was meant more to contest the Christians rather than to record the spiritual experience of Muhammad.

The second theory, proposed by Ya’qubi, Eutychius, Creswell and Goldziher, argues that this site was actually built by Abd al-Malik of the Umayyad dinasty as an alternative pilgrimage object besides Mecca since Mecca was at time under a rebel group led by Ibn Zubair. According to this theory, there is a very strong possibility that the Dome of the Rock was built as a rival to Mecca. By erecting this alternative sacred space, Muslims around the world were expected to do the hajj to Jerusalem. Therefore Dr Munjid emphasized that pilgrimage in practice can often be an asset of contestation.

Nearing the end of his presentation, Dr Munjid discussed about a pessimistic future of the contestation over this sacred space from political point of view. Palestinian Arabs have been constantly expelled forcefully by Israeli government while the Jews gain privilege from the Israeli law of return, besides the existence of the segregation wall. On the Israeli side, there are two views on when Jews have to go ‘back’ to Israel: the Zionist view and a theological view adopted by some Jewish groups. The latter argues that the Jews need to wait for the coming of the Messiah while the second argues they do not need to. On the other side, Palestinian people have bad options between Hamas which does not want to negotiate at all and opt more for a struggle by force; and Fatah whose leaders are corrupt.

During the Q&A session, a participant asked about the role of Christians in this contestation. Dr Munjid replied that the pilgrimage in general might increase the tension of conflict depending on the story they bring in and bring out. If the pilgrims come for a very exclusive understanding of the space, belonging only to particular community, they will make the reconciliation harder. Unfortunately, there are sometimes visitors who believe in an apocalyptic idea that the sooner the fight between the Jews and the Muslim happen, the sooner Jesus will come. This idea is definitely advantageous for them, but not for the parties within the conflict. Another participant asked about the two-state solution campaigned by the United Nations. Dr Munjid said that neither Israelis nor Palestinians believe in that solution anymore. Palestinians he met during his visit seemed to be seriously pessimistic when stating that this Israeli-Palestinian conflict is the best example of a problem without solution.