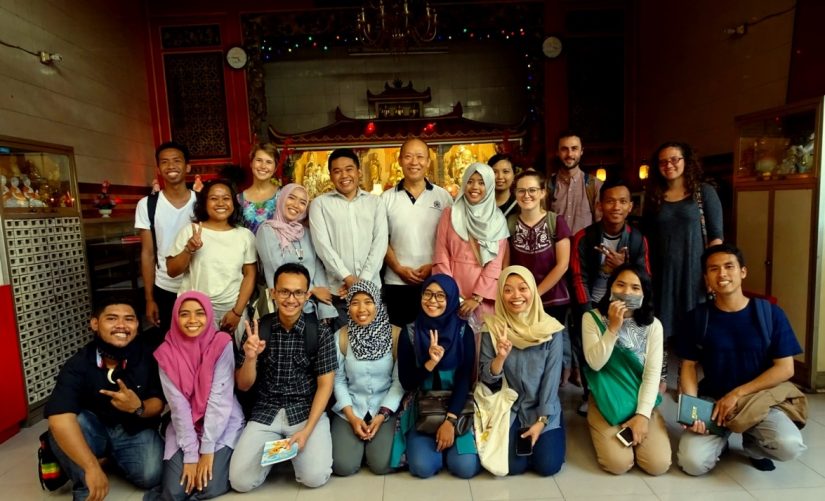 As part of the Advanced Study of Buddhism course at CRCS, students accompanied by lecturers, Dr Gregory Vanderbilt and Ms Yulianti, visited two different Buddhist communities in Yogyakarta on February 27, 2018. This field trip was to introduce the students to various elements and religious practices of Buddhism in Indonesia.

The first destination was Vihara Buddha Prabha, which is uniquely under the same roof as Klenteng Fuk Ling Miau, located on Jalan Brigjen Katamso. We were given a very warm welcome by Romo Agus, director of the Yogyakarta Buddhayana School for the period 2017-2020. He began his lecture with a brief explanation about the historical background of the Klenteng Fuk Ling Miau and Vihara Buddha Prabha, which is under the Majelis Buddhayana Indonesia. The building itself has been established for more than two hundred years, making it a cultural heritage owned by Yayasan Bhakti Manggala Dharma.

The building originally functioned as a gathering place for Chinese people, who were not many at that time, to hold discussion and religious activities in the form of tridharma practices directed at deities and holy figures from Buddhism, Confucianism and Daoism as well as local religions in China. This building began to be used by the Buddhist community following the visit of Bhikkhu Ashin Jinarakkhita in 1950.

Romo Agus invited us to explore the temple. Near the entrance, we saw Chinese artworks covering the wall since 1960 with the names of the donors written on tiny papers. As we went inside, we saw a statue of the main deity Hok Tik Cing Sien (Dewa Bumi/ Deity of Earth) to whom the temple is dedicated. There were also additional statues such as Day Yang Sing Koen (Dewa Surya/ Deity of Sun) and Day Ing Poo Sat (Dewa Chandra/ Deity of Moon). People from any religious backgrounds are welcome to pray to those deities. In another part of the temple, we found a statue of Hian Thian Siang Tee (Dewa Tanah/ Deity of Soil) to whom people pray for a good harvest.

Red candles with various sizes caught our attention. “Usually during Chinese New Year, people will bring candles and lit them as a symbol of prosperity. The size of the candles represents one’s social status. The bigger the candle the more expensive it is and so the wealthier the person is. The candle symbolizes life. Our lives can be like candles: burnt down to give light to others. Although the candle is small, it is still useful to its surroundings. Our lives may be useful to others not only in terms of materials, but in something immaterial such as sharing values and compassion,” Romo Agus answered our curiosity.

There was a student asking about the meaning of the swastika symbol on the Siddharta Gautama statue. Romo Agus answered that swastika has two meanings; first is wisdom and second is compassion. Likewise, we observed the statues of Guanyin with many hands holding water, flowers, et cetera, symbolizing compassion, help, and protection.

Next, we observed the Theravada altar. Surprisingly, there were statues of Guanyin (associated with Mahayana Buddhism). Next to the Theravada altar is the picture of Bhikkhu Ashin Jinarakhitta, who was earlier mentioned as the founder of the temple and of Buddhayana.  He was ordained first in Zen and later in Theravada and throughout his life he maintained a beard to go with his saffron robes, although monks usually shave off all their hair.

After exploring the first floor of the temple, we went up to the second floor, which is a place for meditation practice. The words “Namo Sanghyang Adi Buddha” are written above the altar. Responding to a question from a student about its meaning, Romo Agus explained that it was a request from the Minister of Religious Affairs to Bhikkhu Ashin Jinarakkhita back then, to name the deity with a name that may represent an Indonesian-ness of Buddhism.

After spending more than an hour in Vihara Buddha Prabha, we headed to our next destination, Vihara Karangdjati, located on Jalan Monjali. We met Pak Totok, the chairman of the vihara, Pak Bram (of the CRCS 2002 batch), and Bu Susan, leader of Buddhist women’s community. Pak Totok stated that Vihara Karangdjati is the second oldest temple in Yogyakarta. It was a cowshed at the beginning, owned by Romo Among Pradjarto who eventually handed over the place to Bhikkhu Jinaputta since according to a monastic rule, a monk cannot stay longer than two weeks with lay people.

We observed an unusual Buddha statue by the time we enter the main room of Vihara Buddha Karangdjati. It is painted in black wearing a beautiful gold robe. We were informed that the function of the statue is merely to serve as a reminder and not a sacred one since it is not placed on an altar.

They have routine events, such as Puja Bhakti every Wednesday evening when they recite the Paritta Suci. Paritta is certain verses from Buddhist scriptures. By reciting Patitta, one hopes that his or her mind can be protected by the teaching of Buddha and be prevented from misfortune.  Each Friday, they hold a public meditation session attended by people from many religious backgrounds, because meditation is taught and practiced as a method for knowing one’s mind, and not a particular kind of religious devotion.

Not only the name of deity Namo Sanghyang Adi Buddha being used to represent an Indonesian-ness of Buddhism, in addition to reflect the richness of Indonesian diversity, Buddhists in Indonesia come from different ethnic backgrounds.

As a centre for interreligious studies, visiting houses of worship such as Vihara Buddha Prabha and Vihara Karangdjati will be a memorable experience for CRCS students. This field trip effectively engage the students with other religious practitioners. The impact of such a live experience would bring greater understanding of other religions, notably in the context of Indonesia as a multireligious country.