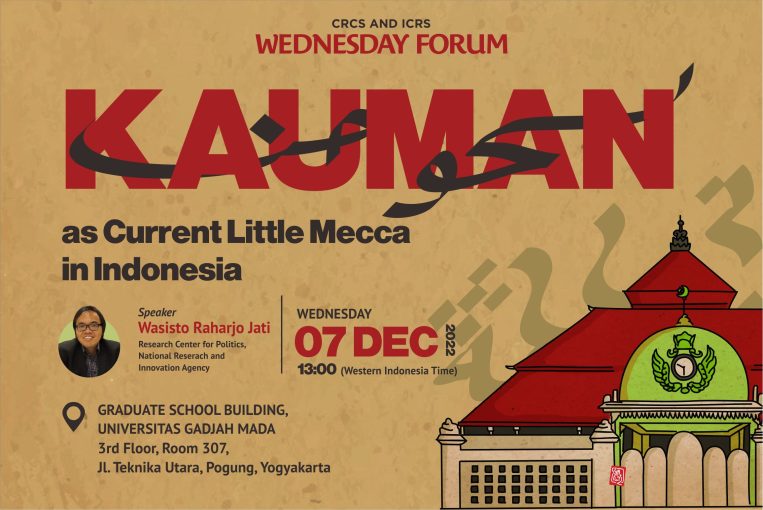 Kauman is one representation of Little Mecca that still existing in several cities in Java Island, Indonesia. It has been a center of Islamic teachings since the sultanates period until now. Kauman itself historically was a small kampong that next to the grand mosque. It was the home for ulama and his families to live and take care the mosques. After returning home from hajj pilgrimage, some ulama established their own boarding schools in Kauman. They would like to transfer knowledges from Middle East to their students. This makes Kauman emerged an Islamic enclave in urban areas. One prominent Kauman kampong is Kauman of Yogyakarta. It was well known for ulama’s residential area during Mataram Kingdom and early Yogyakarta Sultanate period in the late 18 century. But now it has been changed to be large kampong that inspired the birth of Muhammadiyah, the second mass Islamic organization in Indonesia. This kampong transformation historically show how the inter-linkage connection with Middle East especially pan-Islamism movement and reformist Islam spirit. These two values basically were inspired from the same movement in Arabian Peninsula. Some building itself still has an Islamic architecture that influenced by Middle East. This architecture basically showed the cultural connection with the middle eastern civilization, particularly mosques and boarding schools. More importantly, Kauman is entirely pedestrianized that ensure the quietness condition for students studying Islam inside the surau or langgar. This shows how Arab identity is important to preach Islam in Indonesia especially urban areas. This study would like to reveal the continuing connection between middle eastern influence and Islamic teachings in Kauman.

Wasisto Raharjo Jati is a researcher at Centre for Politics, Indonesia National Research and Innovation Agency (Pusat Riset Politik – Badan Riset dan Inovasi Nasional/ PRP-BRIN), Jakarta – Indonesia. His main interests are politics of middle class, the relationship between religion and politics. Currently, he focuses on the rise of Indonesian Muslim middle class and its political preferences.