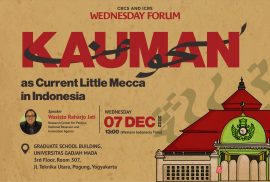 Kauman is one representation of Little Mecca that still existing in several cities in Java Island, Indonesia. It has been a center of Islamic teachings since the sultanates period until now. Kauman itself historically was a small kampong that next to the grand mosque. It was the home for ulama and his families to live and take care the mosques. After returning home from hajj pilgrimage, some ulama established their own boarding schools in Kauman. They would like to transfer knowledges from Middle East to their students. This makes Kauman emerged an Islamic enclave in urban areas. One prominent Kauman kampong is Kauman of Yogyakarta. It was well known for ulama’s residential area during Mataram Kingdom and early Yogyakarta Sultanate period in the late 18 century. But now it has been changed to be large kampong that inspired the birth of Muhammadiyah, the second mass Islamic organization in Indonesia. This kampong transformation historically show how the inter-linkage connection with Middle East especially pan-Islamism movement and reformist Islam spirit. These two values basically were inspired from the same movement in Arabian Peninsula. Some building itself still has an Islamic architecture that influenced by Middle East. This architecture basically showed the cultural connection with the middle eastern civilization, particularly mosques and boarding schools. More importantly, Kauman is entirely pedestrianized that ensure the quietness condition for students studying Islam inside the surau or langgar. This shows how Arab identity is important to preach Islam in Indonesia especially urban areas. This study would like to reveal the continuing connection between middle eastern influence and Islamic teachings in Kauman. 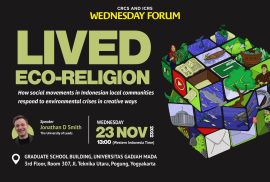 How do religions respond to environmental crises? Beyond debates about religion as destroying or saving the planet, we present a synthetic review of 244 qualitative studies (some written by CRCS/ICRS alumni) of 208 environmental social movements operating at the local community level in Indonesia between 1990 and 2022. Using this data, we present a conceptual model for how environmental movements employ creative adaptation of religious beliefs and practices to motivate changes in environmental behavior. We share three findings and their implications: 1) high levels of synthesis between official religions, adat systems and local wisdom; 2) contextual factors that directly influence environmental movements to adopt blended environmental and lived religious responses; 3) intense contestation within local communities shaping the creative process. 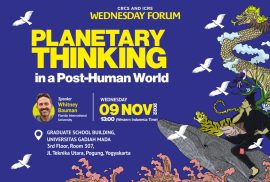 In his book, The Darker Side of Western Modernity, Walter Mignolo outlines several options for a future of the planet beyond the western, modern colonial world. He spends most of that book talking about the decolonial option, with only fragments spent on what he calls “the spiritual option.” In brief, the spiritual option is about decolonizing religious traditions through more embodied spiritualities that focus people on the human and more-than-human communities in which they live. As such, the spiritual option has affinities with both “liberation” style religious strands and with animisms found in indigenous communities. In addition, recent scholarship around “New Materialisms” also suggests that there is agency and value in the rest of the natural world: much like in animist traditions, everything on the planet is alive, acts, and is acted upon. In my contribution to this discussion, I make an argument for the ethics of a post-human world from animist and new materialist perspectives. Such an argument depends on something like a planetary spirituality, which may be a supplement to Mignolo’s “spiritual option.” 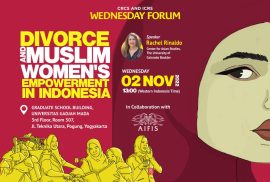 Muslim family law is a crucial determinant of women’s rights in many Muslim settings. Muslim family law is commonly interpreted to stipulate a family structure in which husbands are breadwinners and household leaders while wives are responsible for the domestic realm and may be expected to obey their husbands. However, gender norms and practices in majority Muslim societies have changed, with increasing numbers of women pursuing higher education and careers. This study examines Indonesian Muslim women’s divorce narratives during a period of increasing divorce cases. I find that by facilitating women’s exit from marriages, Indonesia’s Islamic courts accommodate women’s changing expectations of marriage. The case of Indonesia illuminates how a religious legal system may have unintended consequences, promoting women’s higher aspirations for marriage and potentially shifting gender norms more broadly. 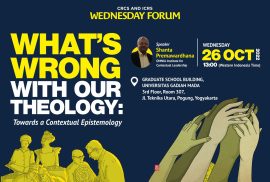 Theologies of the major religions have over the centuries so colluded with empires that untangling its first principles from those that legitimize the oppressions of empires is difficult, if not impossible. This is a Christian theologian’s reflection on an alternative theological epistemology, based primarily on the principles proposed by Paulo Freire more than fifty years ago. Is it too late for religions, or can they listen to, learn from and live in deep solidarity with those in the margins? An innovate approach – Interfaith Peacemaker Teams – that combine the best practices of interreligious dialogue and Alinskian (as in Saul Alinsky) community organizing proposes an answer. 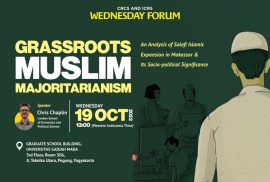 Over the past 30 years, Indonesia has witnessed the growing prominence of a number of transnational Islamic revivalist movements. These have had a considerable impact on political culture, as the popularity of these movements has gone hand-in-hand with increasingly sectarian views across segments of Indonesian society. Yet how do such movements successfully transmit their ideas at the grassroots level and present them in ways that influence national political opinion? Conversely, how does such grassroots activism alter the message and social aims of such activists? I aim to address these questions by focusing on the city of Makassar, South Sulawesi, and the activism of Indonesia’s largest Salafi-influenced organisation, Wahdah Islamiyah. Illuminating how Wahdah Islamiyah have grown their local network of mosques and schools, and the subtle practices they deploy to frame their Islamic message in ways that both relate to the anxieties of their audience, I explain how they promote a Muslim majoritarian vision of society. More broadly, I conclude by assessing the extent to which such activism can form an understandings pertaining to the socio-political mobilisation of religious social movements, and what it may tell us about the health of democratic debate and pluralism in 21st century Indonesia.