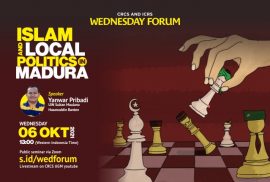 Islam and Local Politics in Madura 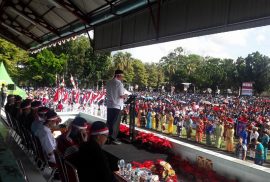 
The fraught election of a new leader for Jakarta has triggered reactions from regions across Indonesia and influenced the dynamics of local identity politics. As will be discussed in this essay, adat organizations promoting local identity as grounded in ethnic customs, in Minahasa, a Christian majority region of North Sulawesi, have gained momentum from controversies in Jakarta to reassert their existence by protesting against organizations they identify as intolerant towards Indonesian pluralism. Specifically, they have turned their attention to those  groups pushing the position that, as a Christian, former Jakarta governor Basuki Tjahaha Purnama (known as Ahok), was not permitted (according to one reading of the Quran) to serve as the governor of a majority Muslim province.
However, we shouldn’t rush to characterize the reactions of these organizations based in adat and (Christian) religion as primordial or sectarian. There is a wider context that must be understood in the examination of these symptoms. The presence of these adat organizations and their self-declarations in the process of rejecting intolerance and political turmoil must also be read as an expression of politicized identities in the context of the dynamics of local politics.
Minahasan Identity in the Era of National Political Transition from the New Order to Reformasi and Democracy
Studies of the local politics in Indonesia which unfolded in a relatively new context during the transitional period from 1998 through the early 2000s have shown that local conflicts over religion and adat were not divorced from turbulent national politics. The conflicts in Ambon and Poso starting in 1998 through the early 2000s, and the efforts of “Islamic politics” groups in Jakarta lobbying for their political agenda in the national parliament provided the context through which regional/local communities understood their position within the so-called Unified State of the Republic of Indonesia (NKRI).
In Minahasa, various responses emerged to the threat of Islamicized politics. For example, a discourse of “Independent Minahasa” was heard at the first two Great Minahasa Congresses (Kongres Minahasa Raya). The implications of these statements should not be exaggerated as they were seen as reactionary and failed to find a wide reception with the Minahasan public. Instead, a discussion of federalism emerged, in connection with its well known supporter, Dr. Bert Supit, drawing on the ideas of national hero of the movement for independence from the Dutch Dr. G.S.S.J Sam Ratulangi. The idea of Minahasa as a unified political entity taking the form of a special autonomous province was also part of the conversation. These discourses originally only circulated amongst intellectual and political elites, and even they did not agree among themselves.
The early emergence of this discourse in the early 2000s therefore cannot be said to have had any significant impact. The point, however, is that the disconnected symbols of adat and culture used to represent Minahasan identity were drawn into political contestation for the first time since the Permesta conflict (1957-1962), when several generals from Minahasa sought to consolidate the regional public to challenge the central government in Jakarta.
Adat Organizations and Local Politics in Minahasa
The first adat organization to play a role in post-New Order local politics in Minahasa or North Sulawesi was the Manguni Brigade (Brigade Manguni or BM), formed in the year 2000 as response to violent conflicts in two regions not far from North Sulawesi: Ambon and Poso. The organization’s founders declared that it was created to protect the adat lands of Minahasa from the threat of conflict. Throughout its growth, BM consistently claimed to be organization dedicated to protecting the stability of Minahasa within the framework of “Indonesian-ness“. Yet the Manguni Brigade also reminded the Minahasan public of the period of Permesta, as its name and symbol (an indigenous owl (Otus manadensis) that is sacred in local tradition) were taken from one of Permesta’s military units.