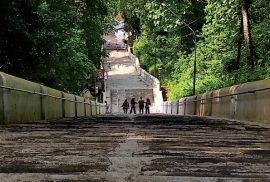 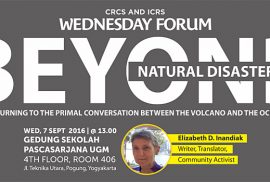 Wednesday Forum: Beyond Natural Disaster, Returning to the Primal Conversation between the Volcano and the Ocean

Abstract
Scientists say that we have entered the Anthropocene, the era in which the influence of humankind on the many disasters on our earth is decisive. But ancient societies already understood disasters as a very complex and subtle interaction between the mood of man and the  movement of nature. This is what we are reminded of by the Javanese tale Babad Ngalor-Ngidul, the title of which comes from a word we no longer understand: ngalor-ngidul.  Composed of two Javanese words– lor  for north and kidul for south plus the prefix ng that marks a back and forth movement–, ngalor-ngidul must have originally meant “from north to south and from south to north, in an endless burst of reciprocity and interdependence,” but now only means to talk nonsense. In the tale, the fates of the two villages, one in the south near the sea and one in the north near the volcano, are bound together as the former, destroyed by an earthquake, rebuilds itself, body and soul, while the latter becomes mentally corrupted before being devastated by a volcanic eruption.  The tale is told in restore among the survivors the clarity of the “eye of the heart” that allowed the guardian of the volcano to “read” the mother-mountain and it reminds us that we must learn again to listen to the water of the ocean and to the sand of the volcano, the last speakers of a “primal” language that has existed since long before humankind.
Speaker
Elizabeth D. Inandiak is a writer, translator and community activist. Since the age of nineteen, she has traveled the world as a reporter for various French magazines and radio broadcasters. In 1989, she settled in Yogyakarta, Indonesia. She has translated and recreated into French, Indonesian and English the great epic of Java: The Book of Centhini, published in Indonesian by Gramedia (Centhini – Kekasih yang Tersembunyi). Her new book Babad Ngalor Ngidul, (Gramedia) is a tale about the earthquake and the volcanic eruption in Yogyakarta. She is currently working on a book about Muara Jambi together with the young villagers of the site. 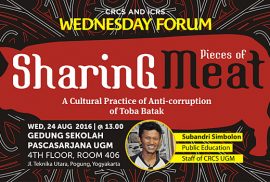 Abstract
Corruption is a problem of civilization which, by extension, is a problem of culture. This must be confronted by reviving the cultural values of anti-corruption. Learning from local traditions which combat corruption can be a powerful instrument to fix corrupt tendencies in a state. Strong beliefs in local cultural values can become the base of these efforts. In other words, the culture will create the people, and the people will create the civilization. Presenter try to offer an overview of Mambagi Jambar (Sharing Pieces of Meat) activity as representative of the cultural activities which combat corruption. By basing on ethnographic interviews and analysis of related texts, the presenter will describe this discussion in a systematic matter. The first part introduces global corruption and, furthermore, the issue of corruption in Indonesia. The second part describes the activities of padalan jambar juhut in Toba Batak culture. The last part then discusses these activities and their contributions in an effort to revive anti-corrupt cultural practices.
Speaker
Subandri Simbolon is Public education Staf at CRCS-UGM. His research, focused on culture and populer issue, has been published in globethic.net journal. He finished his BA at Sekolah Tinggi Filsafat dan Teologi (STFT) Widya Sasana Malang  where he majored in Christian Philosophy. In 2014, he graduated from CRCS-UGM where focuse on Culture and Ecology. In 2014 and 2015, he awarded the first winner for globetthic.net essay competition about “Anti Corruption Ethics and Religiosity (2014) and “Responsible Leadership (2015)“. 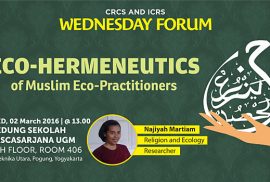 Abstract
Contemporary Muslim discourse on Islam and ecology displays a strong normative approach which deduces its views on Islam and environmental issues from the main textual sources of Islam. However, recent works on the ecological practices of Muslim individuals and communities are showing that such practices are not merely implementations of text-based norms; rather, they also engender new arguments and understandings. Putting attention only to normative debates tends to ignore the fact of pluralism within Islam and different ways of reading the Islamic texts, and the diversity of Muslim eco-practices as well. Following an examination of this discourse, this study focusses on how one Muslim eco-practitioner has developed, justified, and defend eco-friendly practices, and his ideas about Islam and ecology are lived through his practices. It shows that ecological practices not only apply normative texts, but also function in the formation of “Islamic views of nature” and “Islamic environmental ethics”. Finally this presentation also produces different narratives on Islam and ecology which need to be acknowledged and may prove more inspiring for advocacy than the apologetic ones.
Speaker
Najiyah Martiam earned her Bachelor’s degree in Agricultural Technology from Gadjah Mada University (UGM). After spending 4 years working on reproductive health issues, she came back to UGM to study for her Master’s degree in religious studies at the Center for Religious and Cross-cultural Studies (CRCS) where she currently works as public education staff. She is also researching Islam and ecology, and practising permaculture with her community. Her interests include religion and science, religion and ecology, Sufism and women’s spirituality, and music and spirituality. 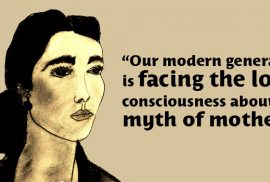 In the beginning of her presentation, she drew a picture portraying goddesses of Nusantara (Indonesia Archipelago) on white board and told about narrative and myth over the mothers. She said that in humility paradigm of ecofeminism, all trees, animals, land and water have its own systems of thinking and communicating. How the stone whispers, why the water is raging, and how the land thinks. There is equality between human being and other non-human being. It was Dr. Phil. Dewi Candra Ningrum, the editor- in chief of Jurnal Perempuan (JP- Indonesian Feminist Journal) presenting in the CRCS’ Wednesday Forum on November 25th 2015.