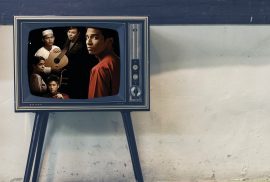 Watching Talentime at CRCS: A look into identity

A student's reflection on the Talentime movie watched in the CRCS's Religion and Film course. 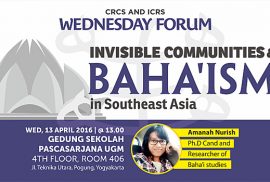 Abstract
The spread of religious millenarianism in the member states of the Association of Southeast Asian Nations (ASEAN) has raised significant questions about religious movement in those countries. The Baha’i religion provides an important case and relevant context as the Baha’i movement has been paralyzed in its country of origin, Iran, since the beginning of the movement in 1844. To avoid persecution and violence, many Baha’i adherents moved to other regions in Southeast Asia. The Baha’i religion is committed to developing educational skills, economic sustainability, gender empowerment, and social movements. Thus, ASEAN encompasses a dynamic and diverse region that aims to provide social, religious, economic, and cultural security for ASEAN citizens. Minority religions such as the Baha’i community, which at the times are victims of conflict and violence, play an important role in achieving those aims. Conversely, religious violence and conflict may be seen as part of the regional deficit in terms of religious freedom and tolerance. In this context, my study tries to examine religious millenarianism and the future evolution of the ASEAN community. The study investigates the co-existence of the Baha’i community with other religious groups such as Muslim, Christian, and Buddhist in their social, political, and cultural negotiations. As the Baha’i engage on some social and political issues in globalization and embrace liberalism and pluralism in the public space, I argue that this study contributes to scholarship in terms of understanding the fate of religious millenarianism in the future of the ASEAN community.
Speaker
Amanah Nurish Ph.D Cand Researcher of Baha’i studies. She is pursuing doctorate at ICRS UGM-Yogyakarta and working as consultant of USAID team-Washington for assessment program, “Fragility and Conflict”. She wrote book chapters, articles, and journals. Her latest publications: Sufism and Baha’ism: The Crossroads of Religious Movement in Southeast Asia (2016, Equinox publisher, London) Perjumpaan Baha’i Dan Syiah Di Asia Tenggara (2016, Maarif Jurnal, Jakarta) Welcoming Baha’i: New Official Religion In Indonesia (2014, The Jakarta Post) Social Injustice and Problem Of Human Rights In Indonesian Baha’is Community (2012, En Arche Journal, Yogyakarta) etc. She received prestigious awards for her academic works such as King Abdullah Bin Abdulazis’s interfaith center-Vienna, SEASREP-Philippine, ENITS-Thailand, Luce & Ford Foundation-USA, ARI-NUS, etc. With her teamwork, she is currently undertaking a broader anthropological research on “ Religious Millenarianism in ASEAN countries” for publication supported by Arizona State University of America. 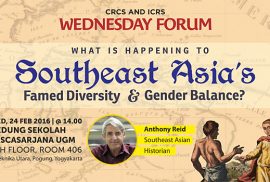 What is Happening to Southeast Asia’s Famed Diversity & Gender Balance ?

Abstract
Among Southeast Asia’s many distinctive features, some would say stereotypes, there are two which I have helped to build. The first is its great diversity of language, religion, mode of production and political organization, where ‘empires failed to unify’ and stateless hunter-gatherers may still be found. The second is the economic autonomy of women, who had their own secure share in production (planting, harvesting, textiles, pottery, marketing) and therefore an almost uniquely strong position in sexual politics. As an historian, I was excited to demonstrate both features in the era before modernity entranced the region around 1900. Today’s students are entitled to ask, ‘Then what happened?’ Does modernity require nationalist homogeneity and patriarchy? Or was the region seduced by a peculiar ‘Victorian’ model of colonial modernity that could never really succeed in such a context?
Speaker
Anthony Reid is a Southeast Asian historian, once again based at the Australian National University after serving as founding Director of the Center for Southeast Asian Studies at UCLA (1999-2002) and of the Asia Research Institute at NUS, Singapore (2002-7). Since 2004 he has been increasingly interested in the impact of natural disasters on Southeast Asian history.  His books include The Contest for North Sumatra: Aceh, the Netherlands and Britain, 1858-98 (1969); The Indonesian National Revolution (1974);  The Blood of the People: Revolution and the End of Traditional Rule in Northern Sumatra (1979); Southeast Asia in the Age of Commerce, c.1450-1680  (2 vols. 1988-93); An Indonesian Frontier: Acehnese and other histories of Sumatra (2004); Imperial Alchemy: Nationalism and political identity in Southeast Asia (2010); To Nation by Revolution: Indonesia in the 20th Century (2011); and A History of Southeast Asia: Critical Crossroads (2015). 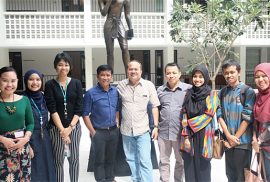 Making Southeast Asia and Beyond: Featuring Asia through Academic Discourses

New work in exploring new directions in re-contextualizing and re-conceptualizing Southeast Asia and Southeast Asian Studies was the main feature of the international conference hosted by Southeast Asian Studies Program and International Studies (ASEAN – China) International Program, Thammasat University, Bangkok, Thailand. This program was conducted in the Faculty of Liberal Arts, Thammasat University Tha Phrachan center in Bangkok on 15 – 16 January 2016. It was the second event held by the center of Southeast Asian Studies, Thammasat University in collaboration with University of Gadjah Mada Research Center. The first was held on 2 – 3 May 2014 at Gadjah Mada University, Yogyakarta, Indonesia.
As shown in its title “Making Southeast Asia and Beyond,” this conference had three important objectives. First, it was a space to encourage the exchange of views, experiences, and findings among senior scholars, young researchers and students. The second objective was to offer a platform for students to present their research and findings. The last, this event becomes the medium to promote academic and research collaboration between universities in ASEAN Community. The conference welcomed a variety of papers dealing with historical, cultural, political, social, religious, or multidisciplinary researches as the stage to share and engage issues concerning Southeast Asia.

This conference was attended by many scholars, graduate students, and researchers coming from several universities in Thailand and Indonesia. During two days, there were three seminar sessions and five panel discussions. The topics of the seminars were “New players in Southeast Asia,” “Southeast Asia and East Asia: Interconnections,” and “Indonesia and Muslim Studies: a New Perspective.” The panel discussions were focused on “Media and Business in Southeast Asia,” “Religion and Identity,” “Tourism and Management,” “Cultural Politics in Asia,” and “Memory and Modernity.”
The heart of motivation for this program could be summed up through some words delivered by the keynote speaker, Emeritus Professor Charnvit Kasetsiri from Thammasat University. In the opening session of his speech topic “From Southeast Asian Studies to ASEAN: Back to the Future?” he said that the opportunities are good for Southeast Asia and for ASEAN, but the region also needs integration –the possibility of a dream of one vision, one identity, and one community. Consequently, our efforts to reach this future, should be in line with the blueprints for political security, and all economic, and socio – cultural aspects in the ASEAN charter.
The Center of Religion and Cross – cultural Studies (CRCS), University of Gadjah Mada, was also invited to participate in this conference. Suhadi, as one of the lecturers, was a speaker in the first session of the seminar entitled “New Players in Southeast Asia” from the perspective of religious studies. Two students, Farihatul Qamariyah and Abdul Mujib from the batch 2014, presented their papers in the panel discussion on “Religion and Identity.” (Editor: Greg Vanderbilt)