What can scholars of religion contribute to water management? 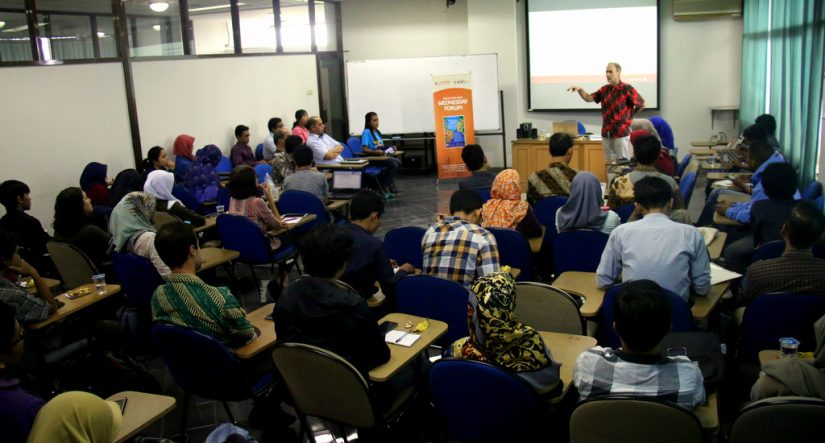 What can scholars of religion contribute to water management?

In commemoration of World Water Day 2018, Frans Wijsen, Professor in the Department of Empirical and Practical Religious Studies, Radboud University, the Netherlands, now working on a research project related to the Citarum River, West Java, gave a presentation at the CRCS-ICRS Wednesday Forum on March 28, 2018, on what scholars of religion can contribute to water management.

Wijsen told about the successful story of the Rhine Action Program (1987-2000). The Rhine is one of the largest rivers in Europe. Connecting the main industrial areas in Europe to the seaport of Rotterdam, the river was heavily polluted due to chemical accidents in 1986. Accordingly, the program launched the next year was aimed at restoring the river. Its goals were successfully achieved by 2000, including the reduction of chemical pollution, the improvement of water quality, the return of flora and fauna, and the flourishing of small businesses.

Based on the achievements of the program, Wijsen argued, there are lessons that can be shared to Indonesians to solve the problem of the polluted Citarum River. He explained that what is needed is a comprehensive approach, which incorporates cooperation between the government and interdisciplinary experts, a demonstration of the profitability of “change,” and the involvement by all users and stakeholders.

In the Indonesian context, however, Wijsen contended that religious or faith-based organizations must be engaged, because most Indonesians are religious and therefore religion is very important, and faith-based organizations have large networks that provide social services. Besides, the Citarum Integrated Resources Management Program launched by the government indeed already includes religious leaders. Most importantly, Wijsen argued, the pollution of the Citarum River is also a spiritual and cultural problem.

Wijsen subsequently presented about his research project on how religion relates to the pollution of Citarum River. Conceptually speaking, he focused on lived religion or religious practices instead of text-based religion, on “situational belief, cognitive dissonance, and dialogical self,” each aspect of which serves as a theoretical framework to reveal how religious people perceive and think in regard to the river and act accordingly. Meanwhile, technically speaking, Wijsen employed “socio-cognitive discourse analysis” to discern how religious people express particular rhetorics and logics when speaking of the river.

For example, Muslims do ritual washing or purification (wudu) before performing prayers. However, in doing so, they still use dirty water from the Citarum River. This leads us to question their perception on purification in Islam and on the pollution of the river, and how the two are interrelated in practice.

Wijsen offered several findings. First, Muslims make a distinction between clean water and pure water. The latter refers to running water that might be unclean. In fact, many users of the water for wudu realize that water in the river is unclean, but still consider it pure according to hadith. For Wijsen,  this reveals that in practice people make a distinction between “expert knowledge” and “ordinary knowledge”.

Second, “people say that there is no relation between religion and water, but in practice they do use religion.” Yet, for Wijsen, there is a difference between those living in the rural area and those in the urban area. In Kampung Mahmud, for example, the villagers learn how and when to dig wells from myths. In the past there was a myth that they were not allowed to dig wells because the practice is dirty and disturbs the homes for snakes. But, when the government urged them to dig wells in the 1980s, they asked their ancestors for permission. They broke the myth and began to dig. Wijsen contended, however, that altering myths in this way would not work to solve the real problem: the polluted river.

Concluding his presentation, Wijsen recommended that we have to employ a bottom-up instead of a top-down decision making process. It is imperative therefore to include local people’s perspectives in the process. Accordingly, rather than providing services for local people, the government should work more on establishing and developing people’s “self-regulation and active participation”.

Responding to a question from a participant on how a scholar of religion can contribute in overcoming the problem of water, Wijsen insisted that we have to pay much attention to the way religion is lived and practiced by local people so as to understand its influence on people’s attitudes toward water. Theologians usually see religion from a scripture-based perspective. Wijsen suggested that they also have to take social-empirical approaches into account as a way of understanding the very root cause of the problem. Therefore, they should do “a creative hermeneutics” to contextualize religious beliefs in the light of contemporary problems.