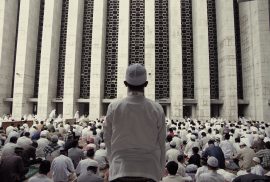 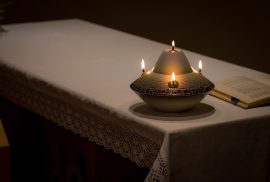 The secularists must learn to accommodate religion in the public sphere while the religious leaders must help balance the public role of religion with spirituality. 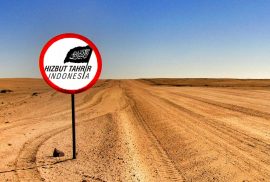 Disbanding Hizbut Tahrir, a step back to New Order

The government’s reason in its move to disband Hizbut Tahir Indonesia, claimed to have an ideology that contradicts Pancasila, should remind us of the “Pancasila as the sole foundation” politics of the authoritarian New Order regime.

Discovering the Story of Lia Eden: Prophethood as a Living Tradition in Indonesian Society

Al Makin, a lecturer from ICRS and Ushuluddin Faculty in UIN Sunan Kalijaga, gave a fascinating presentation about his newest book Challenging Islamic Orthodoxy (Springer, 2016). He began his presentation by commenting that his research on prophethood in Indonesia may not be very new to the ICRS and CRCS community, but discussion of the polemics of prophethood is interesting as Indonesia is home for both the largest Muslim population of any country in the world and to many movements led by self-proclaimed prophets after the Prophet Muhammad. In Al Makin’s perspective, we should see this phenomenon from a different perspective, as part of the creativity of Indonesian Muslim society.
In 1993, the Ministry of Religious Affairs issued a selection of characters of what constitutes religion, include the definition of the prophet, a requirement of recognized religions. According to the Ministry of Religious Affair, prophets are those who receive revelation from God and are acknowledged by the scripture. However, following Islamic teaching, Muhamad is the seal. God no longer directly communicates with humankind. In Al Makin’s definition, prophets are those who, first, have received God’s voice and, second, establish a community and attract followers. He also reported that the Indonesian government has listed 600 banned prophets that fit these criteria. Interestingly, Indonesian prophets tend to come from “modernist” backgrounds connected to Muhammadiyah, which rejects other kinds of traditional and prophetic religious leadership, like wali and kyai.

After two years of trying, Al Makin gained complete trust from one well-known prophet in Jakarta, Lia Eden, and her community of followers. The wife of a university professor, Lia Eden was famous as a flower arranger and close to members of President Suharto’s circle. She quit her career when she was visited by bright light she later identified as Habibul Huda, the archangel Gibril. After that, she became prolific in her prophecies. She found many skills that she had not had before, like healing therapy. Her circle become a movement called Salamullah, meaning “peace from God” but also referring to salam or bay leaves, used in her healing treatment.
In orthodox Islam, there are no women prophets and no prophets after the Prophet himself. The ulama declared her and her followers heretics. Lia Eden returned the criticism, accusing the ulama of being conservative and criticizing Islam as an institution, especially how the ulama council uses its political power and authority.
Al Makin closed his presentation by showing the way public has responded to Lia Eden. This movement can be considered a New Religious Movement sparks controversy because of how they attract followers. In Indonesia it is more about theology than political or economic interest like it is elsewhere. Ultimately, Al Makin argues that Indonesia’s prophets should be recognized as unstoppable—they usually become more active when in prison—but should be seen as part of the wealth of Indonesia pluralism.
Al Makin responded to a question from Mark Woodward about why Lia Eden’s community with only 30 members would become such a big problem for the government by citing Arjun Appadurai, who has argued that a small number becomes a threat to the majority in terms of its purity. It is true that she has a very small number of followers but she is also very bold and outspoken in deliver her messages constantly sending letters to many political leaders, including the ambassadors from other countries and issuing very public condemnations. Greg, another lecturer from CRCS, also asked why she is called bunda and whether she is making a gender-based critique. Al Makin answered that there have been a few other women prophets besides Lia Eden in Indonesia and that Lia Eden’s closest associates are women. 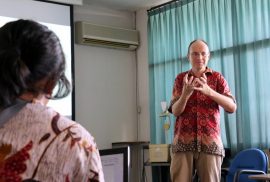 From Religion and Globalization Class

One of the exciting courses at CRCS is “Religion and Globalization”. Dr. Gregory Vanderbilt, the lecturer, has approached the study in an active and critical manner involving all the students in class activities. According to him, throughout the class students are expected to increase their capability to raise questions concerning the relation between religion and globalization as he himself prefer framing the class in series of discussions with world-wide ranges of topic.
As an American lecturer who has been working with CRCS since 2014 through Eastern Mennonite University, Virginia, he is a very well-experienced educator as he previously spent some years teaching in Japan. Moreover, his interest in following up the up-dated global issues including religious nuances, made him familiar with framing the methods of studying religion and globalization.
Global ethics is one of the topics we discussed in the class, the last material before the end of the class. Previously, we talked a lot about globalization as a phenomenon affecting religions as well as several religious responses toward globalization. Despite the supporters of globalization, many religions seem to fearfully reject it, some even proclaiming their resistance and becoming more radical.

Given the case of the famous forgery the Protocols of the Elders of Zion, an issue which is widely spread even in Japan (as well as Indonesia) is that Jews are the scary ghost behind a world conspiracy that can eventually make Japan as its next target. At least, this is what had affected Aum Shinrikyo, a radical religious sect, to declare war on Jews conspiracy and blaming them for brain-washing Japanese people. In 1995, this sect even became more radical and went wild killing tens of people in the Tokyo subway by poisoning them with deadly gas and injuring thousands of victims. Their resistance is, in fact, affected by global issues brought by high velocity of information through media and technology which successfully landed in the minds of traditional society.   In this case, Aum Shinrikyo shows the same fundamentality as that of the terrible bombing of 9/11 in New York City by international terrorist network, Osama Bin Laden. In Rethinking Fundamentalism, a book we discussed in the class, we could see the influences of globalization toward religious community attitudes caused apparently by their fear, and their will for religious purification from distortion they see as brought by globalization.
Therefore, to foster the stabilization of the world order from war and disputes, it is necessary to rethink globalization in ways that are more ethical and friendly to the world. On the topic discussion of global ethics, we learned about attempts by world organizations like the United Nations in generating international agreements including the UN Declaration on Human Rights. Besides, other agreements such as the Cairo and Bangkok Declarations represent local voices which to some points define human rights differently.
The difference in worldviews among international actors is interesting because each organization tries to define a global value within their own relativities. Moreover, some theories think that UN Declaration on Human Right is a Western domination over other cultures without considering cultural relativities, including religions, each of which inherits different theological and structures while at the same time sharing common values like peace, humanity, equality, and justice.
World issues indeed became valuable perspective in this class. Students are meant to not only understand theories but also keep updating their knowledge on what is happening in the recent international world. While negative influences of globalization such as war, religious radicalization, and other world disputes were discussed in the class, there is also a hope for a global agreement and bright future by sharing noble values like cooperation, justice, human dignity, and peace on global scale. The existence of world organizations and religious representatives in fostering global ethics proves the progress made towards creating world peace. The duty of students, in this case, is to contribute academically to spreading such values without neglecting the variety of cultural and religious perspectives.
*The writer is CRCS’s student of the 2016 batch. 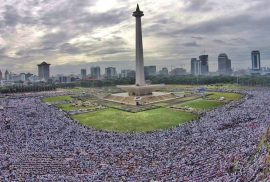