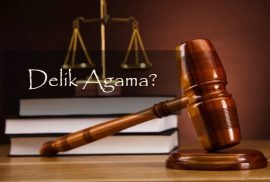 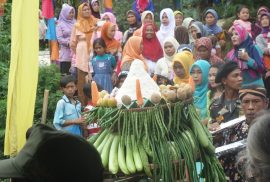 "In the language of CRCS, God has no hands but yours."

The kyai switched to English for just one sentence as he joined other village leaders in welcoming CRCS’s Eighth Diversity Management School or Sekolah Pengelolaan Keragaman (SPK) to the village of Mangundadi, 23 km west of Magelang, at the foot of Mt. Sumbing.  Perhaps his choice was to honor the diversity present in this group—or that the chasm from ivory tower to mountain village had been bridged for an afternoon—as we tried to absorb the dance performance based on the carved reliefs of Borobudur we had just experienced. Though the village is 24km away from the 10th-century sacred site, and Muslim, it and its arts are part of the Ruwat-Rawat Festival movement that seeks to re-sacralize the great Buddhist monument from the disenchantment of the tourism industry and the weight of the busloads that climb it each day to snap selfies and admire in passing the craftsmanship of a millenium ago.
We were there because of the friendship with Ruwat-Rawat founder Pak Sucoro that has developed over the last year thanks to CRCS alumna Wilis Rengganiasih.  Owner of the counter-narrative-producing Warung Info Jagad Cleguk across from the gates to the Borobudur parking lot and instigator of the eight-week festival each April-May, he had arranged an amazing afternoon for the excursion that has become an important change-of-page for SPK members after a week of ideas and passionate discussion.  On the Saturday of the ten-day long school, the twenty-five members of SPK plus facilitators and friends departed by bus the school’s venue at the Disaster Oasis in Kaliurang, heading first to the warung at Borobudur to meet our guides and then heading another hour west from Magelang.
The road to the village of Mangundadi was too steep for our bus and so we were met at the main road by the pickups and motorcycles of the young men of the village.  Having climbed on board, off we went to Mangundadi, the motorcycles revving their engines in a chorus of welcome.  Afterwards SPK staffer Subandri admitted that he has now a tinge of positive feeling when he hears the youth gangs disrupt the city streets with their noisy machines, because what a welcome it was!  When we reached the village, women lined the lane to shake our hands as we were ushered into one house to catch our breath, and then to process around the village’s new mosque with the genungan ritual mountain of vegetables, followed by the groups of performers, children, youth, adults, already in gorgeous costume and make-up.   By the time we had feasted in another house, the performers were ready and, as the rain fell, they danced scenes from the stone reliefs.  In the end, Pak Sucoro pulled some of us onto the stage to move with them and then they offered their salims and went back to their villages.

In the evening we returned to the Omah Semar retreat house near the monument-park for a discussion with Pak Sucoro about his vision of Borobudur as a universal spiritual heritage and as a place of spiritual significance for local culture, a place for Indonesian society to make a new choice, to live in harmony with God, nature, and each other.  The Ruwat-Rawat has incorporated and re-ignited local traditions by focusing them on a global question, the question I asked the Advanced Study of Buddhism students who met Pak Sucoro back in May: who owns Borobudur?  The next morning, walking across the lawns where his village once stood, we could see the stupa-monument in a new way.
This was my third SPK since I came to CRCS in 2014.  For me, it is an opportunity to meet the activists, academics, government workers, and media people who come to participate and see how change is happening across Indonesia.  Each SPK may have its own character—this one, for example, was quicker to start singing than put on a mop of cringe-worthy joke telling—but the greater tone of excitement at being among others as serious of purpose and as ready to be challenged to greater intellectual depth is constant.  The participants are excited by guest insights from Bob Hefner and Dewi Candraningrum but even more by the well-developed program from a core of facilitators devoted to teaching “civic pluralism” as a paradigm for just co-existence in the contexts of Indonesian diversity, one basing access in the three Re-‘s of recognition, representation, and redistribution, combined with thinking systematically about such core CRCS emphases as taking apart religion as lived and governed in Indonesia, digging into research for advocacy and putting into practice the theories and methods of conflict resolution.  Equally important, they stay up late sharing their work, from teaching to preaching to activating NGOs to working conscientiously from inside government.  Some know of the program because they have heard about CRCS while visiting or studying in Yogyakarta; others, following friends and co-workers who applied previously; and others still from searching online for “pluralism school” in order to serve better as religious and social leaders.
Visiting SPK alumni in their homeplaces—Jakarta, Aceh, West Sumatra, and Jambi, so far—has also shown me glimpses of grass-roots possibility across Indonesia.  Trainings and workshops are regular features of Indonesian civil society, but it appears SPK leaves a more lasting impression on its participants.  This is perhaps because of the intensity of their twelve days in the aptly named Disaster Oasis and perhaps because it challenges them more to take an intellectually grounded, hopeful framework to the places they are working and asks them to return with a research project, on how a pluralistically civil society is being made in soccer clubs and local studies movements and activism for gender (five from SPK-VIII work against domestic violence) and ethnic equality and film festivals and women’s economic literacy programs in villages and so on.  In that way, the village kyai is right.
*The writer, Gregory Vanderbilt, is a lecturer at CRCS, teaching courses, among others, on religion and globalization; and advanced study of Christianity. 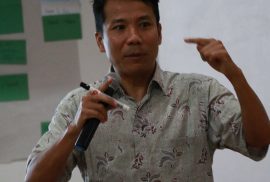 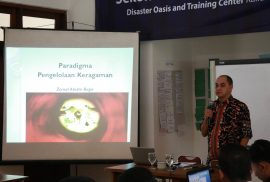 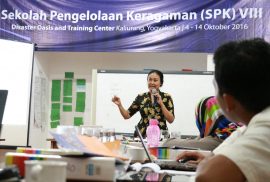 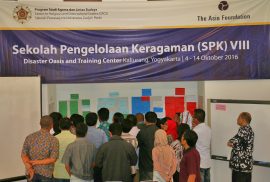