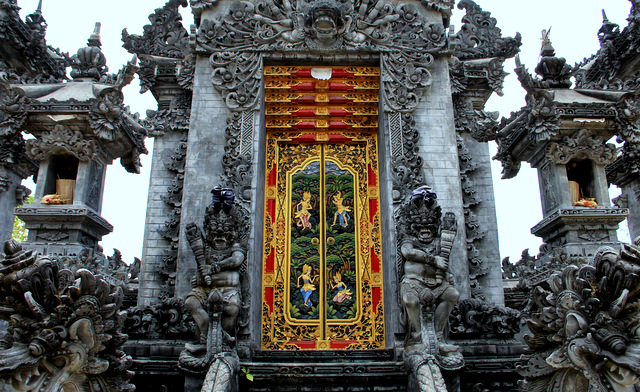 Walking into a place of worship offers a very specific sensation as you are aware that, regardless of whether you follow the religious belief or not, it is a ’sacred’ space for many people, but one which also reflects the intersection between the private, public and political elements of the religion.

Under the shadow of the large outside seating area, Romo Agustinus Winaryanta SJ introduced us to the St. Antonius and a little about the history of the space. Opened in 1926 by the Jesuit missionary Romo Xaverius Strater, the church previously included the main church building and a seminary where the room lived, before expanding to the many outbuildings which can be found today. As the most famous Catholic church within Yogyakarta, the direct community only contains around 329 members, but the congregation can swell to as much as 9,000 or 12,000 each Sunday, or for festivals like Christmas or Easter as Catholics from around Yogyakarta come to the church for the services, held both in Indonesian and Javanese. Historically, this church has been most popular for young Catholics in Yogyakarta, with many youth groups of university or school students meeting there for Sunday mass. There are four Romos, or Fathers, at the church with two working as lecturers in the nearby Catholic university Sanata Dharma.

Nationally, Catholics only make up around 3% of Indonesia’s population with the majority residing in the Eastern islands of Indonesia, yet Central Java has its own unique, slightly later history of Catholicism. Noted as one of the first Jesuits to successfully bring Catholicism to Java, Franciscus van Lith understood that to bring Catholicism to the local population, the church shouldn’t cut the root of local beliefs and culture but build on them, creating a more localized, syncretic form of Catholicism. Elements of this can be seen all around the Church of St. Antonius where murals painted around the walls show scenes from the Bible in Javanese style, with Mary Magdalene wearing batik, and various Biblical figures sitting in a pendopo (gazebo-like building). In the corner, there is also a gamelan where members of the congregation can meet each week to practice Javanese hymns and religious songs made specifically for the gamelan.

Pura Vaikuntha Vyomantara was built in the barracks of Adisutjipto Air Force base in 2007 for Hindu followers within the military. Internally, there are ten soldiers within the airbase who attend the Pura, but members of the public from the surrounding area also use the temple. Like Catholicism, Hinduism in Indonesia contains particularly localised elements.

The entrance to the pura is marked by two large stone columns and intricately engraved doors, and you could be mistaken for imagining you had been transported to a temple in Bali, the only Hindu-majority province of Indonesia, with a small pendopo, or meeting area outside the main temple area, and various statues and bale (small covered shrines) within. During the construction of the Pura, military officials and figures from the temple visited the now late spiritual figure Mbah Marijan on Mt Merapi to ask his permission to open the temple. Gods and goddesses engraved in the temple complex are, Pak Ketut Marse, the Pura’s manager explained, manifestations of the ultimate God, who within Indonesia is known as Sang Hyang Widhi to fit within the state’s construction of a ‘religion’.

Asked about which specific branch of Hinduism was followed in the Pura, Pak Ketut Marse explained how the temple practices trimurti (lit. three forms), with Brahma as creator, Vishnu as maintainer and Shiva as the returner. Because of its position as a temple for military members, the temple also specifically worships Pasupati, or the sacred weapon of Arjuna, a central character in the Hindu epic Mahabharata, to give them strength in battle. Similar to the sacraments in Catholicism, there are five forms of rituals which Indonesian Hindus should do throughout their life. These are called Panca Yadnya (lit. Five Devotions/Offerings) which include worshipping the gods, celebrating rites of passage such as birth and marriage, offerings for ancestors, ceremonies dedicated to priests, and offerings or rituals for animals, plants or supranatural beings. These five branches of worship are broken down into hundreds of festivals, offerings and rituals throughout the year, but according to Pak Ketut, Javanese Hindus tend to come to the Pura for the large festivals like Nyepi and Galungan.

The third and final place of worship we visited was the Buddhist Vihara Karangdjati where we met Pak Totok, the chairman of the vihara, and Pak Bram who was a student at CRCS in 2002. Hidden away down a side street in between a rice field and a row of coconut trees, the temple is a moment of calm off the busy road of Jl Monjali. Declared a Vihara in 1962, some five years before Buddhism was officially declared a religion, the temple used to be called Karangdjati Buddha so those outside the temple knew it was for Buddhists. Karangdjati is currently one of 22 Viharas in Yogyakarta and practices Sangha Theravada Buddhism, however other forms of Buddhism are also welcome to practise within the space.

Spatially, the layout of the Vihara is a little similar to the main church building of St Antonius, with two rooms featuring an altar at the front displaying a large Buddha statue so that normally worshipping inside the Vihara is positioned facing the front. There is also an outside courtyard, kitchen and dormitory around the back. Within the first room of the temple, a large Buddha statue in the style of the Buddha statues at Borobudur sits, with a mural of stupas as the background. In the second, larger room within the temple, a golden buddha statue similar to those found across Thailand and Sri Lanka looks over the room.

Asked about the importance of the statues, Pak Bram explained that for each Vihara, the figure of the Buddha, Gautama Siddhartha, represents something different. For some he acts as a figure to reflect upon, to consider the achievement of bodhi (enlightenment); for others the statue of the Buddha is decorative, a symbol that one is in a Buddhist space; for others perhaps something more, a human with superhumanity, or ‘counter-intuitive [god-like] elements’ (Pyysiainen 2003). This can potentially be seen within Indonesian Buddhism who, guided by the first sila, Ketuhanan Yang Maha Esa, or belief in one Almighty God, acknowledge the existence of Sang Hyang Adi Buddha, the Buddha Lord first written about in Java the 10th century. Pak Bram reminded us however, that despite the many variations in Buddhism, what lies at the centre is the alleviation of suffering and the path towards it. As Buddhism does not require conversion, many followers of other religions come to the temple to meditate to incorporate it into their personal religious practice.

As the field trip drew to an end there was much to reflect on. Having entered the communal, sacred space of one Catholic Church, a Pura and a Vihara, students could get a sense of both how other religions approach the ‘sacred’ and how the ‘global’ of world religions and the ‘local’ of the community mix together to create a ‘glocalised’ religion, which I think can be seen in all the places of worship visited on this field trip.

Harriet Crisp is a CRCS student of the 2019 batch. Read her other essay—Forging sacred spaces through sound: the Matua community