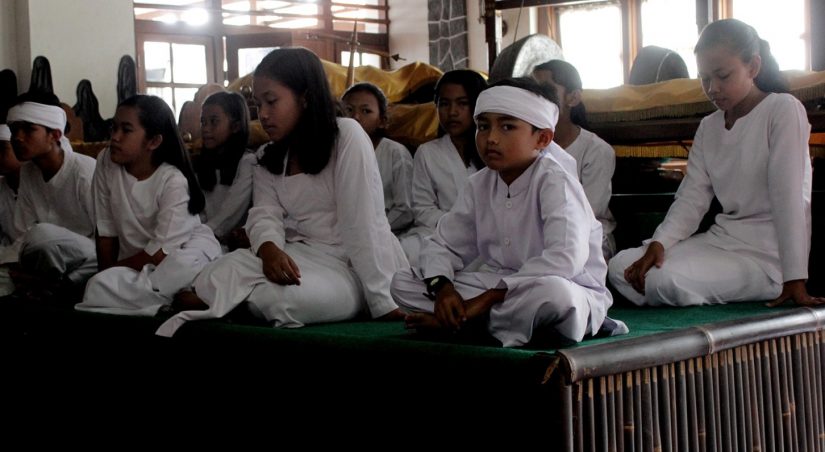 On 7 November 2017, the Indonesian Constitutional Court (Mahkamah Konstitusi/MK) ruled favourably on a judicial review of the articles of the Civil Administration Law’s related to how religion is recorded on the identity documentation of followers of indigenous faiths (aliran kepercayaan). These citizens will now be able to list their religion as pengyahat kepercayaan (followers of indigenous faithrs) on their national ID cards (KTP/Kartu Tanda Penduduk). Previously, they were either forced to nominally identify with one of the six official religions, or leave the religion column on their cards blank.

Several prominent Muslim leaders have reacted negatively to the MK’s ruling. Among them were Kyai Ma’ruf Amin, who is both general chairman of the Indonesian Ulema Council (MUI) and supreme leader (rais ‘amm syuriah) of Indonesia’s largest Islamic organisation, Nahdlatul Ulama (NU); Yunahar Ilyas, a member of the central leadership board of Indonesia’s second largest Islamic organisation, Muhammadiyah; and Din Syamsudin, former both MUI and Muhammadiyah chairman.

All these Muslim leaders have basically said that aliran kepercayaan is not religion, but rather a cultural practice, and therefore should not have equal status as religion in Indonesian law. In particular, Din Syamsudin said that the category of “religion” implies specific criteria, namely a concept of God, a scripture, and a prophet-like figure. According to this view, since indigenous faiths lack at least one of these criteria they are not religions.

These Muslim leaders seem to hold a monotheist-biased paradigm of what constitutes religion. Within the Indonesian context, there are three ways to refute it.

The first is with reference to Indonesian law, as highlighted in the MK decision itself. One of the two fundamental parts of the MK’s decision was that the religion column in citizens’ ID cards as mandated by Articles 61(1) and 64(1) of the Civil Administration Law is unconstitutional because the word “religion”—as understood for the purposes of administrative law—does not include indigenous faiths. The main legal basis of this decision is Article 29(2) of Indonesia’s 1945 Constitution, which declares that “The State guarantees all persons the freedom of worship, each according to his/her own religion and belief/faith (kepercayaan).”

The Court acknowledged that this article may imply that religion and kepercayaan are two different things, since between the two words there is the conjunction “and”. However, the Court based its argument on their reading of how the founding fathers formulated Article 29 of the constitution, both Paragraphs 1 and 2, in the lead up to Indonesian independence in 1945. The initial draft of Article 29(1) read: “the State shall be based upon Islam with the obligation to abide by sharia for Muslims.” This Islamic clause was deleted and replaced with “based upon Ketuhanan Yang Maha Esa” in the last minutes before the official promulgation of the constitution on 18 August 1945.

Despite being erased, in the court’s view the “Islamic clause” remained relevant because of its connection with Article 29(2). The MK said that, given the context that Article 29(1) was initially meant for Muslims only, Article 29(2) was meant to guarantee freedom of worship for all non-Muslims.  Therefore, the two words agama and kepercayaan were not meant to be distinct from each other; in the Court’s view, the founding fathers implied that the word kepercayaan was part of religion, despite the conjunction “and”.

A noteworthy fact was that the word kepercayaan in Article 29(2) was originally proposed by Wongsonegoro, a member of the constitutional drafting committee who later became Minister of Education and Culture, deputy prime minister, and founder of Badan Kongres Kebatinan Indonesia (Indonesian Spiritualism Congressional Assembly). The word kebatinan was used as a synonym for kepercayaan in the 1965 decree on defamation of religion, which later became the Blasphemy Law. It is an obvious, but unfortunately overlooked, fact of history that a past leader of aliran kepercayaan/kebatinan communities contributed to the formulation of Indonesia’s constitution.

This understanding on the part of the Court led to the other major element of its decision: that discriminating in practice between religion and indigenous faiths, such as by requiring followers of indigenous faiths to leave their ID cards’ religion column blank, contravenes the constitution.

The second response to critics of the ruling is from an academic viewpoint. Scholars of religion have long considered that defining religion by the kinds of criteria as stated by Din Syamsudin is biased in favour of monotheism. Sadly, while most scholars remain critical of the use of the degrading word “animism” to denote indigenous faiths, this term is still prevalent in both Indonesian academia and popular discourse.

The uncritical use of such terms in Indonesia is ironic, given the fact that the idea of “animism” was a western construct to refer to “primitive”, “heathen” cultural entities yet to be modernised. A paradigm that constructs a separation—and in turn a stratification—between religion and culture was also in part a modern western invention, one which then spread all over the world thanks to western colonisation.

Indeed, if we consistently apply that narrow understanding of religion, several major religions recognised by the Indonesian state would not be among the officially recognised agama. Theravada Buddhism and Confucianism, for example, do not have a concept of a personal God comparable and parallel to that of monotheists. It was only after such a monotheist-biased paradigm was imposed upon them (thanks to the first principle of Pancasila: Ketuhanan Yang Maha Esa) that they were forced to adjust themselves to Indonesian political discourse by “inventing” a God—Dhamma in the case of Indonesian Buddhism, and Tian in the case of Indonesian Confucianism.

It has become common today to use the term “indigenous religions” in English-speaking academic discourse. Seen from this global development, the usage of the word kepercayaan, let alone “animism”, in Indonesia is outdated. What is largely underdeveloped in Indonesian academic studies of religion (of course with a few exceptions) is an understanding of religion that is critical of the political discourse described above, and is aware of its historical development. Such a critical approach can be exercised, for example, in the way we understand the meaning of the Indonesian word for religion, agama, itself.

The word agama did not mean “religion” in its original Sanskrit; rather, it referred to a range of literatures or scripture. In fact, there is no word that is equivalent to the English “religion” in Sanskrit—the closest is the word dharma, but this is too is not exactly equivalent to religion. What happened during the colonial era in Indonesia was that the Dutch picked the word agama to denote religion, and then Indonesians instilled into its meaning a monotheist-biased understanding. In light of this, we can understand agama as it is currently understood in Indonesia as an invention, and a modern one at that.

This invention not only impinged on agama as understood in its original Sanskrit meaning, but on many if not all of the institutionalised religions we know today. “Hinduism”, to take the best example, existed only after the name was invented not by the Hindus themselves but by Persians, then taken by a Muslim historian (Abu ar-Rayhan al-Biruni [d. 1048], in his work Kitab al-Hind), and was eventually adopted by the British in India. “Hinduism” was initially a simplified term to denote highly diverse traditional beliefs and practices that existed beyond the Indus River. As summarised by Wilfred C Smith in his classic The Meaning and End of Religion, “There are Hindus, but there is no Hinduism.” So, besides being an invention, Hinduism—and for Smith this also applies to all major religions, including Islam—has experienced a “reification”, an evolution from a fluid traditional practice with no clear boundary between the religious and the secular/cultural into a perceived concrete unity of an institutionalised belief and practice.

Finally, there is a Quranic viewpoint on the status of indigenous faiths—and this argument is specifically for Muslims. A very popular verse in the Quran reads, “For you is your din, and for me is my din” (Q 109:6). Who were the addressees of this verse? The Meccan pagans! The Quran identifies Meccan pagan practices and categorically refers to them as “din”, the Arabic word commonly translated as “religion”. The Meccan pagans at that time did not have a scripture or a prophet-like figure. Yet the Quran uses the same categorical term to refer to both pagan practices and the religion of Islam. Coincidentally, or rather ironically, the Indonesian Muslim leader who said that a religion must have a scripture and a prophet-like figure is himself named Din.

Azis Anwar Fachrudin is an alumnus and now a staff member of CRCS UGM. This piece was originally published at New Mandala.