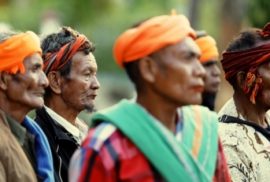 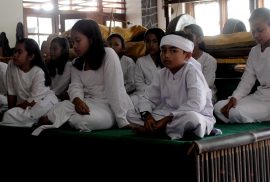 In insisting that “animist” faiths be given a lower status than “religion”, Islamic leaders ignore how the false divide between them was constructed in the first place. 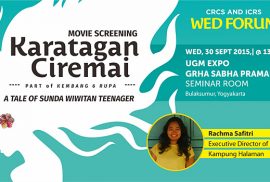 Abstract
Sunda Wiwitan is an indigenous religion of that is practiced by some Sundanese people in Cigugur, Kuningan, West Java. Although the state recognizes this spiritual practice as an aliran kepercayaan, or a recognized belief organization, this community still faces discrimination for practicing their ancestral religion both from the state and from members of the religious majority in their surrounding social environment.  This fifteen-minute documentary tells the story of Anih, a 14 year old Sunda Wiwitan girl, and how she faces the challenges of the societal reactions to being part of a family of Sunda Wiwitan followers.   Karatagan Ciremai is of one of six documentaries of the Kembang 6 Rupa series, a collaborative documentary project voicing girls’ points of view from six areas in Indonesia: Kuningan, Indramayu, Sleman, Sumedang, Sumbawa and Wamena. 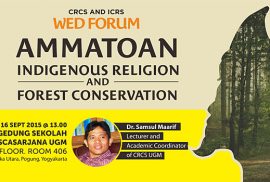 Abstract
Ammatoans of Sulawesi in the eastern part of Indonesia hold religious ideas of social actors that extend beyond human beings. Perceiving both human and non-human beings as equal and constitues inter subjective relationships, Ammatoans’ everyday behaviors and practices is set in this religious perception, including forest conservation. The forest, as vital part of Ammatoans’ life, is conserved by sets of regulations and punishment that restrictly enforced. This presentation will explores how the ideas and practices of Ammatoans’ forest conservation illustrate what scholars have called “religious ecology”.
Speaker
Dr. Samsul Maarif is the Secretary and Academic Coordinator of the Center for Religious and Cross-cultural Studies (CRCS), Graduate School of Universitas Gadjah Mada, Yogyakarta, Indonesia. Achieving Ph.D from Arizona State University, Temple, in Religious Studies and holding two master degree from Florida International University and Universitas Gadjah Mada; both on religious studies, Maarif has long experiences and intensive studies of indigineous religion, especially Ammatoan community.