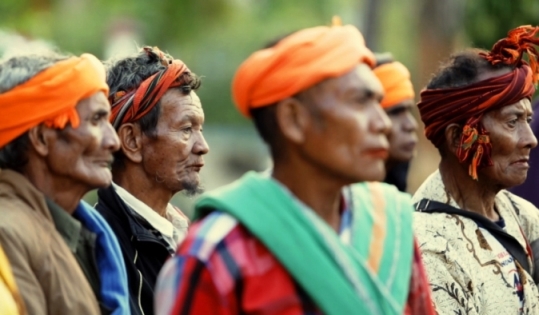 2019 marked the United Nations’ Year of Indigenous Languages, a year designed to “recognize and acknowledge the range, diversity and global value of languages as well as the critical and endangered status of many individual languages around the world, the vast majority of them being indigenous languages”. Language is not solely about vocabulary and grammar structures to convey meaning, but holistically links to world view, identity, memory and understanding.

Unrelated to the UN’s Year for Indigenous Languages but in many ways running parallel in its aims of raising awareness of the threats to indigenous practices and way of life, in the same year CRCS UGM hosted The First International Conference on Indigenous Religions, published a report advocating social inclusion for indigenous religions, as well as releasing Atas Nama Percaya or In the Name of Belief, the first film of the Indonesian Pluralities documentary series in collaboration with Watchdoc and Pardee School of Global Studies at Boston University. Reflecting back on the year, we look at how language and belief are connected, and how these affect – and are affected by – the environment in which they were borne.

In the stretching arc of Indonesia’s islands, around 706 languages are spoken by communities living across the ranging topographies of forests, mountains and cities. For each community, language has passed down through generations, and vocabulary is shaped by familial relations and connection to specific landscapes. As is becoming increasingly clearer, biodiversity, cultural diversity and linguistic diversity are all intrinsically linked, with higher biodiversity associated with higher rates of languages. Luisa Maffi (2018) calls this interconnectedness ‘biocultural diversity’, and highlights how growing urbanisation, migration, deforestation and enforced loss of indigenous culture around the world has culminated in a loss of all three.

Describing biocultural diversity as a ‘socio-ecological adaptive system’, Maffi along with a body of researchers have attempted to raise awareness of this interconnectedness. We often consider how humans are shaped by the world around them, but increasingly researchers are beginning to understand that the nature, often considered ‘pristine’ and untouched by humans is equally transformed and reliant on the humans living within them. Those living in rainforest ecosystems for example, can increase biodiversity by spreading seeds in different times of the year, or cutting down plants which drain the soil. Controlled burning practices by aborigine communities in Australia can help prevent damaging bushfires and help revitalise nutrient levels.

This humans’ dependency on the land, and the land’s dependency on human interaction, can be classed as ‘traditional ecological knowledge (TEK)’—relational and agricultural accumulative knowledge passed down through indigenous communities. The Ammatoa of South Sulawesi, as one example of a community using TEK, structure their forest use in circles, leaving a central ring untouched to respect the personhood of the forest and to allow undisturbed growth. An outer ring exists in which they can take what they need. This allows the forest to continue growing without depletion and with diversity of plants in the outer ring, while those of the community can still use as much as the community needs to live. These practices reflect the Ammatoa’s belief in the personhood of the forest and ancestor worship, meaning a strong belief in reciprocity and respect. Language develops out of the need to communicate this worldview, and document and categories various species which are important to the clan. As Nations explains, “Native languages crystallize the lessons of centuries of daily trial and error”.

With the development of communities into industrialised agricultural societies and cities, the everyday connection with the natural world and the people around becomes weaker, and the relational aspects are lost. State policies championing one dominant group or religion throughout history have also meant that those communities holding onto their local belief system, language or area have been threatened.

These strains to indigenous ways of being, including language, have been felt across the archipelago. For the Bajau community in Sulawesi as one example, the ocean-dependent community has long existed through nomadism and connection with ancestors and spirits.

Although primarily Muslim, traditional Bajau beliefs continue to be central to the community, yet lifestyle changes driven by declining fish populations and state regulations has led to young Bajau people travelling to the main islands for education—primarily based on recognised religion and modern practices—as well as employment. With growing awareness of lifestyle and religion outside the seafaring community, there has been a growing contestation of identity. Young people learn differently to how their parents did, with many learning that their Bajau worldview is not compatible with that of the recognised religions, and their lifestyle and practices outdated, studying more in the national Bahasa Indonesia rather than the Bajau language. The various forces of local culture, nationalism and globalisation all manifest in this struggle of identity.

Loss in this sense becomes compounded: with the loss of indigenous religions and language, there is loss of life. With loss of biological life comes loss of indigenous religions and languages. Perhaps more noticeably in Indonesia than in other parts of the world, indigenous communities, their languages, practices and belief systems are tied up in religion due to the importance of religion constitutionally. Prior to the 2017 Constitutional Court ruling on the inclusion of indigenous religions (kepercayaan) on identity cards (KTP & KK), followers of indigenous religions lacked legal rights surrounding recognition, education, marriage, health care and other civic issues due to the state’s favoritism of world religions, with many forced to convert to the recognised religions, losing their local identity through having to stop or desacralise their traditional practices and rituals. Often if rituals continue to be practiced, these traditions are turned into tourist attractions or ‘cultural events’ with varying degrees of sensitivity.

Since the Constitutional Court ruling, followers of kepercayaan have now been able to apply for the previously blank space on the card to be replaced with the category of Kepercayaan terhadap Tuhan Yang Maha Esa, allowing control of faith matters such as education, spaces of worship and marriage. In a step towards greater inclusivity in Indonesian citizenship, those following an indigenous religion, and not one of the six ‘world’ religions can begin to have a greater voice in the public sphere, allowing communities to shape their own curriculum for schools based on their cosmology, protection for their practices, and hopefully with a growing acceptance of kepercayaan in wider society, buffering the rate of loss which the country has been facing.

Yet that is only one part of the solution to the loss of biocultural diversity and the rights of kepercayaan communities. While the Constitutional Court’s ruling is a step in the right direction for recognition of indigenous believers, it has the potential to alienate those who see themselves as both a follower of a world religion, but also who holds indigenous beliefs (as many people are) and calls into question who can be categorised as officially part of kepercayaan.

At the same time, the law still fails to address the issue of loss of indigenous beliefs and languages through other factors such as general dismissal of indigenous communities, loss of land for mining or deforestation, or migration for employment, with recent statistics saying that by 2045, more than 70% of Indonesia’s population will be living in cities, meaning further homogenisation and separation from natural spaces. This loss of connection is what Maffi describes as a ‘deleterious feedback loop’ with the loss of one accelerating the loss of another in a continuous spiral.

A number of studies have suggested that over 100 of Indonesia’s languages are vulnerable or at risk of dying completely, and many others existing only in the home and not in a formal setting, meaning while language remains, the breadth and variety of language used is greatly reduced. At the same time, biodiversity continues to be lost at an accelerating rate, with the loss of forests at around 450,000 hectares a year and around 1600 species documented as threatened. Once species and environments are lost, the language and rituals associated cease to function in reality.

There needs to be a wider conversation on the importance of language, a discussion on what it means for different communities to speak one language over another, what is lost when language is lost, and whether a focus should be on revitalisation of language or merely recording and archiving, in the hope of preserving at least some of its meaning for future generations. At the same time, across the world there needs to be an examination and redefinition of the relationship between society and nature, shifting common language away from terms such as ‘resource’ and ‘stock’ into a more holistic narrative. This of course, relies on current rates of deforestation and environmental destruction to slow or cease. For certain industries such as agriculture and fishing, looking to indigenous belief systems and their languages can begin to offer alternative, more sympathetic and sustainable practices, allowing for community revitalisation, continued effective agricultural practices, and at the same time protecting the variety of ecosystems found across the archipelago.

Harriet Crisp is a CRCS student of the 2019 batch. Read her other articles here.