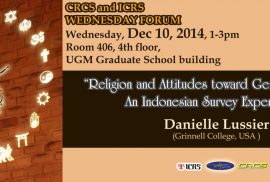 Abstract:
Inequality between the sexes is often regarded as a salient characteristic of Muslim societies. Despite enormous public and academic interest in the possible relationship between religion and sex-based inequality, few works have systematically compared the status of women and girls in Muslim and non-Muslim communities. This research presentation examines the question of attitudes toward sex-based inequality using an experiment embedded in a cross-national public opinion survey.

The presentation will focus on findings from a national-level survey of Indonesia, but will also provide some comparative data from surveys in Jordan, Lebanon, and Uganda that demonstrate several broad conclusions. First, while we find meaningful variation in the levels of support for female empowerment across these countries, there is little support for the hypothesis that Muslims, in particular, hold attitudes favorable toward the unequal treatment of women. Second, we find that interaction with religious leaders and co-religionists does not have a perceivable effect on attitudes toward gender inequality. Third, we find that a respondent’s sex is a potentially strong predictor of attitudes toward gender inequality. The results of our investigation could have implications for a broad range of political outcomes, including social development, structural inequalities, and inter-confessional conflict. 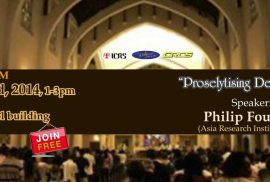 Abstract
Perhaps the prickliest subject in the emerging field of ‘religion and development’ concerns the question of proselytisation. The melding of religious propagation with development and humanitarian activity is widely regarded as immoral, illegitimate and distasteful. This separation has become such a prominent article of faith in development circles that any suggestion otherwise is tantamount to heresy.

In this seminar I seek to re-think this apparently settled consensus. Precisely because it is seen as such a problem proselytisation is a pivotal concept to think with in research into the cultural politics of development. Drawing on anthropological critiques of the category of ‘religion’ I go beyond examining the pervasive ways that religious and development agendas have been entangled to explore the question of whether development itself is inherently proselytising. 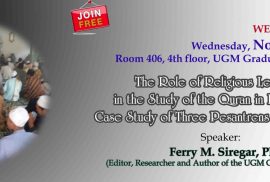 WED FORUM: The Role of Religious Leaders in the Study of the Quran in Indonesia ABSTRACT
In the history of Islam in Indonesia, the pesantren is not the only institution of Muslim religious education, and the tradition it embodies is only one out of several tendencies within Indonesian Islam. Traditionalist, modernist, and fundamentalist discourses emerged and to some extent developed into rigid traditions. The main goal of the pesantrens is the transmission of Islamic knowledge as laid down in scripture such as classical texts of the various Islamic disciplines together with commentaries and discussions on these basic texts written over the ages. 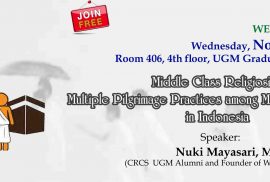 Abstract
The increasing interest of Yogyakarta’s urban middle class in making the umrah gives birth to some important questions especially which relates to the meaning for people beyond the trip itself.  Informants of this research are practicing umrah for a certain regular time, such as once or twice a year. Considering the amount spent for an umrah trip, which is around US$ 2,000 – US$ 3,000, this practice is obviously expensive, compared to the average income for the middle class society in Indonesia, starting for a minimum of US$ 3,000 per year. 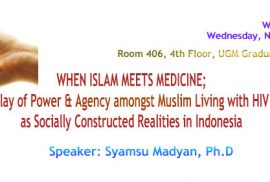 WED FORUM: The Interplay of Power & Agency amongst Muslim Living with HIV & AIDS

Abstract
Departed from the discussion of Religion and Science in the context of Islam and AIDS in this country, this research covers questions related to the complexity of AIDS realities in Indonesian Islam. Through the demonstration of the overlapping knowledge constructions of HIV & AIDS, this research does not only analyse the reciprocal influence of science and (religion) Islam at the level of knowledge constitution, but also accommodates the alternative medicines on AIDS as the synthesis and independent knowledge and reality. 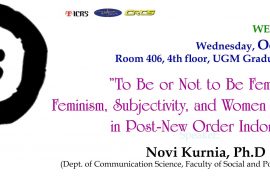 Abstract
The presentation derived from my chapter with the similar title from a book edited by Yvonne Michalik, Indonesian Women Filmmakers, published in the end of 2013. This chapter is derived from my PhD research on women film directors and their films in post-New Order Indonesian Cinema. It deals with the subjectivity of women directors in relation to gender and feminism based on my interviews with 28 women directors I conducted during November 2009-April 2010. There were three groups of responses to questions posed about how their gender influenced their self-perception as film directors. The first group stated that there was no difference between women film directors and their male counterparts. The second argued that the identity of women automatically came to the foreground of being a film director. The third group saw differences between female and male film directors in specific situations. There were also three groups of responses to questions about feminism: some identified as feminist; some saw themselves as feminist but with qualifications; and some were not feminist. Those who claimed that they were not feminists, seem to have been trapped into a negative image of the term  “feminist”. Indeed, these women directors did not share a common understanding of feminism.