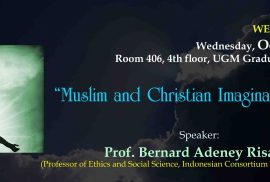 Abstract
This presentation suggests that inter-religious dialogue is not limited to asserting common values, but also invites critical interaction on issues about which we differ.  Is there any relevance of Christian beliefs in a Triune God when in dialogue with Muslims?  This presentation suggests that the trinity is not primarily a metaphysical dogma, but rather a biblical story of a community’s experience of God’s suffering in human history. It is a rich source for a social imaginary of unity in diversity.  Both Christians and Muslims imagine that the Great Oneness of God (Ketuhanan yang Maha Esa) can unify radically pluralistic societies.  But different religious communities have different experiences of how God values and protects diversity. 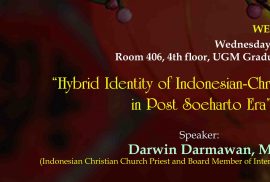 This research tries to unpack Chinese-Indonesian-Christian in negotiating their identity in post Soeharto era. It focuses on the agency of Christianity in that identity negotiation. This ethnographic research was conducted in the Indonesian Christian Church (Gereja Kristen Indonesia, GKI) in Perniagaan Street, Jakarta. 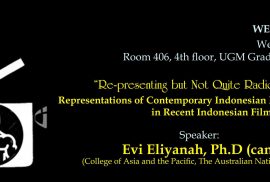 Film has been an important cultural arena in which ideas about Islam and becoming good Muslims are constantly constituted and contested in contemporary Indonesia. Concerned with the social construction of masculinity and its intersection with religiosity, modernity, and globalization, my presentation explores the Muslim masculinity representations in four Indonesian films; Ayat-ayat Cinta (Verses of Love, 2008), Perempuan Berkalung Sorban (2009), Ketika Cinta Bertasbih (When Love Chants, 2010), Ketika Cinta Bertasbih 2 (When Love Chants 2, 2010). These films constitute and contest contemporary Muslim masculinity around uncertainties of modernity and globalization through their wrestles with contemporary gender issues to produce archetypes of new ideal Muslim men; young, urban, middle class, (foreign) educated, gentle towards women, and responsible head of the family. However, despite this representation of masculinity is deemed by scholars as “rediefining” the status-quo representations of Muslim masculinity produced during the New Order, I argue thet the power relation between Muslim men and women is represented is still being ambivalent as evident in the men’s ambivalent accaptance of women being more resourceful in religious knowledge, financial independence, and leadership skills. This ambivalence arguably reflects the contemporary Muslim middle class’ desire of departure from the image of “traditional Muslim” yet not wanting to give up the privilege being provided by status-quo.

WED Forum: The Role of University in Interfaith Peacemaking

University, especially state university, is a salad bowl of students from all around Indonesia with different cultures and religions. They meet and interact in daily life on campus. However, to get into deeper dialogue, intentional platform is needed. University can be the best platform to make this happens. It makes great impact in interfaith peacemaking and the future of our society. We will see a new religious based student movement is emerging significantly to answer the challenge.

Suicide has become one of interesting human behaviors since the early civilization. Alber Camus in The myth of Sisyphus said, “The only interesting philosophical question worth asking is suicide.” Recently, the rate of suicide has risen sharply. It happened in all level of society regardless of one’s profession, education, economic status, religion, age and gender. The increase rate of suicide globally has forced suicide as an urgent subject  that need to be discussed, comprehend and understood deeply in order to prevent it.